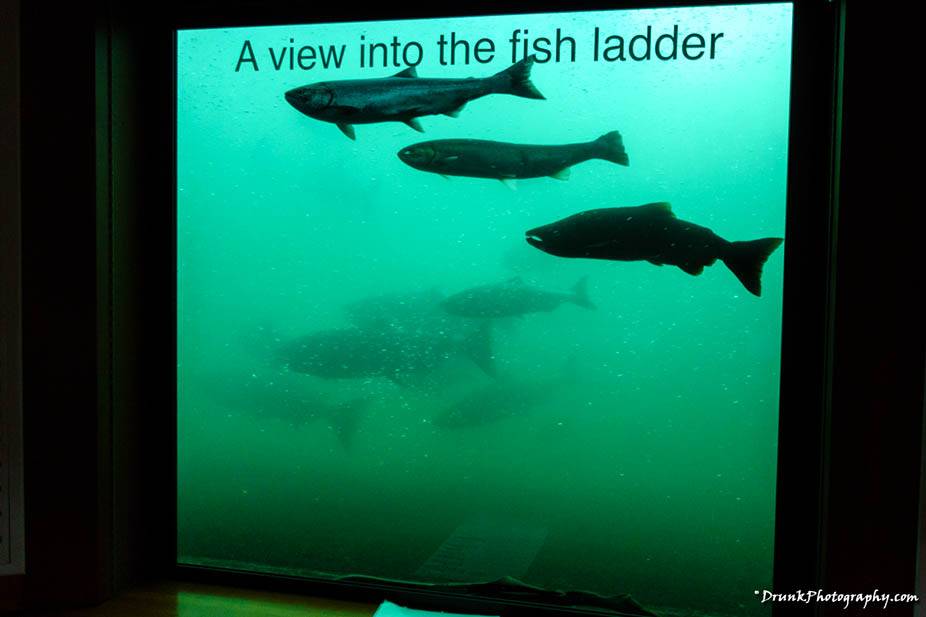 While heading west from Portland, Oregon, we were told to investigate absolutely EVERYTHING that fell within 80 miles of Portland, heading east on I-84. I was told that there was a dam near the Army Core of Engineers building, on Bradford Island and that there was a visitor’s center where I could get some information about things in the immediate area. The first place I went to was this Bonneville Lock and Damn that I heard so much about, and not necessarily in a good way- per some lady who beat my ear to death on the plane. The Bonneville Dam is located 145 miles from the mouth of the Columbia River and is a “run of the river” dam (one of several along the Columbia River), which are hydroelectric generation plants. This area used to be an obstacle for navigating the Columbia River but that’s why this dam is complete with locking systems to get boats through. This dam is also split between 3 islands (Robins, Bradford and Cascade) that the river flows around.  So there is definitely no way to get around this dam, as it was an excellent engineering feat.

The dam was built by, and is still maintained by, the Army Core of Engineers, but not until the Franklin Delano Roosevelt made it important to accomplish, as part of the New Deal. Why was that piece of information important? The USA was in the Great Depression, so this was a great way to generate jobs, and the hydroelectricity being ridiculously cheap brought industries to the area so the economy improved. It was a gamble that paid off for FDR, and the ACE built more like it up and down the river. However, since FDR made the initiative to get this going, that meant electricity generation was a US GOVERNMENT owned entity here, and FDR wanted no chance that any companies would move in try to take over electricity production, and hold the area captive.  FDR knew that Oregon was weird about ownership, like how businessman Simon Benson owned the goddamn waterfall that is Multnomah Falls in the early 1900s!  How can you OWN a Waterfall?  Benson did turn the waterfall over to the state of Oregon after his death though.  FDR warned heavily of monopolies, and hated them! He was very cautious about companies and powerful groups controlling government too, so this was a Government strategy to get this built, by a top 3 President of all times, FDR! But there is a huge problem that FDR and the ACE could never predict.

For the salvation of salmon

While all of that was all fine and dandy, there is an issue that has grown since 1896, which existed before the Dam was built. There was a construction in the water to allow steamboats to flow through the area, the Cascade Locks and Canal. Later, the Army Core of Engineers built 8 dams on the Columbia and Snake Rivers, and then they noticed, over time, that there was a fish problem after putting them officially on the line in 1938. Today, that same problem persists and has worsened to an alarming problem, so bad that in APRIL 2017, the Oregon state CLOSED ALL FISHING OF SALMON IN OREGON FOR THE REST OF THE YEAR!!!! These dams affected the fish there, especially the salmon and steelhead trout. The young families know to instinctively travel to the oceans and back but they were not blocked by the dams. Then you have the issue of build-up behind the dams, making reservoirs of water which create a lot of tension, force, and heat that is not normal to the natural flow of the water. All of that messes with the flow of the water that the fish are used to and when the fish end up trapped in that area, all confused and unable to properly navigate, their predators like the birds in particular, just camp out and pluck them right from these reservoirs, all because of the dam. If the water is slow, then the young fish take a long time to swim downstream, so with the water moving slowly, and the fish too, the predators can get them easier, without them being trapped in the reservoirs too. The sea lions are now coming in this area and destroying the salmon that did pass the dams. There is an overpopulation of these salmon PREDATORS and US Government will need to overturn rules banning their hunting if they’re going to hope to save the salmon. They’re screwed.

This made the ACE build “fish ladders” and “bypass/transport systems” into ALL 8 of the dams they made. These ladders are levels that would allow an uphill swim for the fish over the top of the damn for returns to the area. The problem was getting the fish to know what to do with this man-made contraption so the ACE created a few tricks to water flow, simulating waterfall environments that the adult fish would instinctively know to gravitate towards. Young fish don’t tend to make that trip, so they then had to create bypass and transport systems and turbines that dart them through too. If the young can’t grow up, then there is no salmon population at all! Now, couple these issues with salmon and this issue with salmon. The warming waters are NOT what the fish want, and climate change is also now killing them off too, as droughts continue. Sockeyes are damn near all over, and it’s thought that the Chinook will be the same.

To (originally) try to counter some of this, Oregon built the Bonneville Salmon Hatchery in 1909 but it’s been in overdrive in current times, located near the dam, where they help the salmon breed, release and hope they return to continue to increase the population. There are ponds where you can see the Sturgeons and trout- trout will bite your fingers if you play, watch the kids here. At this place, you can learn everything you need to know about the life of salmon, which is how I learned of this problem I write about today.

Is this a good time to talk about how Salmon are now carrying tapeworms that will kill you? Look I just want some clean salmon, man!