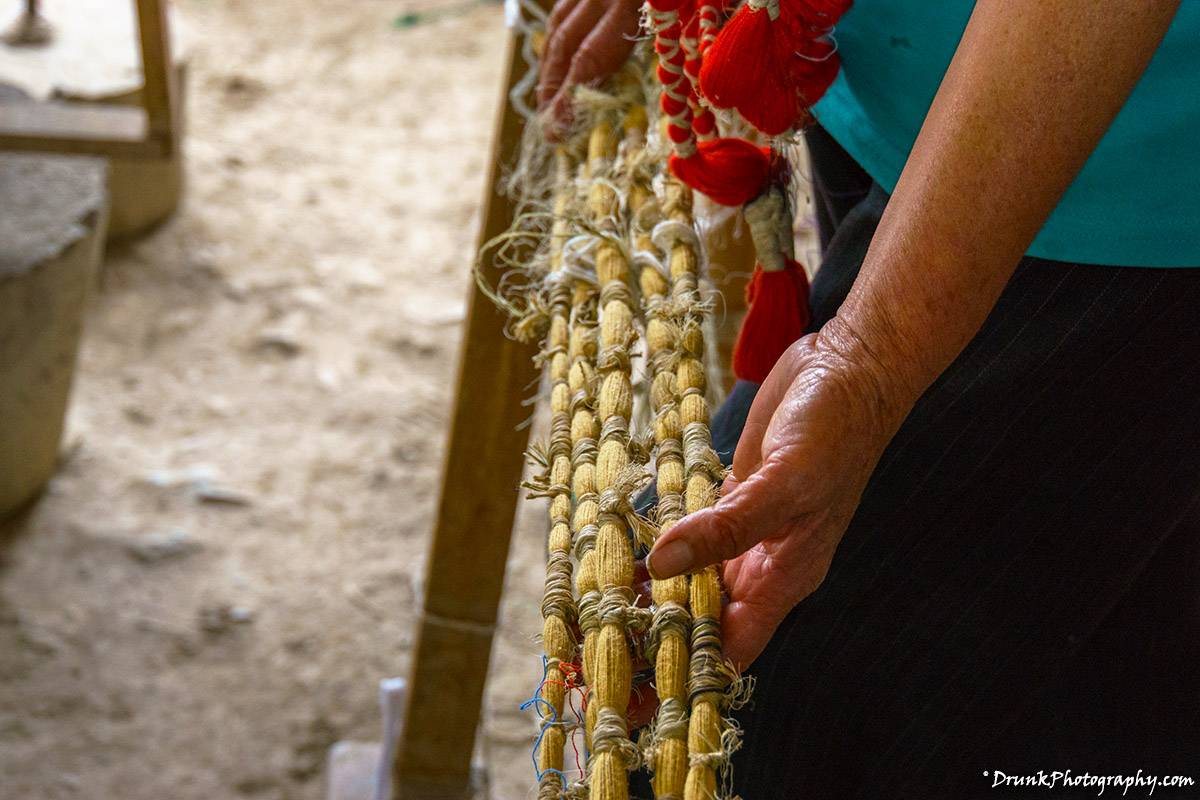 The dying dyeing art of Ikat weaving a Makana

I saw a few cool looking scarfs and shawls (the famed Makana ) being sported in some rare places in Ecuador, and I was on the hunt for excellent gifts for loved ones back in the States. The traditional women (“Cholas”) had them to carry food or babies on their backs with, or when they were just styling in the streets, but I also saw quite a few female tourists rocking them like regular shawls for fashion. I figured they had to be the hot thing there since I didn’t see but 10% of the women I saw with them, but I realized that just the opposite was true. They looked pretty cool, with very interesting patterns rather than plain materials with boring designs, didn’t look like synthetic materials either, so these were done differently than the ones I saw from other countries, there at Makana. It’s theorized that the process to make these types of clothing began in Asia, in times before Christopher Columbus came and affected the lives of the Indigenous people who made up the Americas, via the Pacific. So this is an ancient, cultural art form that has a long history with the Indigenous people of South America, and especially here in Ecuador. This process to make these shawls and scarves and more. is called Ikat Weaving.

The material of these scarfs and shawls is wool or cotton mostly, in Ecuador, but they also use silk, and linen, which upped my interest, immediately, especially since Ecuador uses Alpacas for their wool. When I was forced to inquire about one shawl we saw, we learned that Ecuador was very well known for making these articles of clothing, in this style. However, I could not find them for purchase anywhere I looked, in the cities, I was in until I got closer towards Cuenca, but Ecuador was supposed to have this game on lock. Why wasn’t it everywhere? Apparently, “Ikat Weaving” isn’t big anymore, people would much rather wear MK or Western culture designers in Ecuador, rather than wear traditional garbs, and also many people can’t do Ikat weaving anymore, all over Ecuador. Ikat weaving is a form of culture passed on from generation to generation, so if culture is lost, you end up with less and fewer people participating in or accepting tradition. I saw mostly only older Ecuadorian women wearing the clothing, but to my eyes, initially, it just looked like regular clothing, until I got to see it up close and feel it. I knew that we had to get some of these, so when I got an opportunity to see this process up close and personal, I learned a deep respect for Ikat weaving. It is much harder to make these garbs than I ever could imagine, because in Ecuador, the Ikat it all done by hand, it’s not done by some machine, and it really began to peak my interest. So we set off for  THE place to get exactly what we wanted, from a famous place named La Casa de la Makana.

We had to go all the way to Gualaceo, which is 1 hour east of one of the most popular Cities in Ecuador, Cuenca, to get my hands on these great Ikat works at Makana. Pretty hard to find, but keep an eye out while going east from Cuenca, on the 594, one will find La Casa de la Makana at this specific location HERE. You won’t see it listed on Google, but if you do a Google street view at exactly that location, you will see it’s the storefront match for the pics I put here.

We rolled up and got to meet the owners and creators of the La Casa de la Makana, Don José Jiménez and his wife Doña Ana María Ulloa (Doña Anita she let us call her) with other workers they rely on to make the various types of clothing, from shoes to shawls. I was expecting to see some huge machines, robots or something helping out, but when they said that it’s all hand-made, they weren’t playing around. The ‘machines’ they were using were wooden tools put together all by wood!

Ikat is the dyeing method they use to weave in the various colors, into the wool yarn that is woven up by the various wood machines. They get the weaving to the pattern they desire and then apply the dyes over and over to get the colors and designs they wish to display. I watched as a young worker was going through the pre-dye process on a machine, very careful to separate very thing strings. This art form has various forms and processes. There is a worker who sits and will wind the pre-dye yarn up in a spinning wood structure, which is called the warp machine. This person knows the exact measurements of what the finished product will be, typically 72 inches long. Depending on how wide the product is to be, that changes how much yarn to throw on the warping machines, and they can get up to 100 lines of cotton/wool per inch but they tend to weave 27 inches for the shawls (formula is 72 by 27). They warp (wind) the material, they can throw down a mock-up of the pattern they want to put on the final product, at this point. This part is part of secrets so no one will ever write down the patterns they know how to make, it’s by word of mouth and memorization, so it’s like trademark work here to never blab about your patterns you’ve mastered, just do them from memory. All of the families doing this is the Bulcay area are related to the owners of this shop, so if we see their work, and the demand is high, some of his family members have done the work with them as it’s a family business. This is Warp Ikat weaving, the simplest form of Ikat weaving, but they lost me in how exactly they got to the final product because one can’t watch this and copy it to get the final products.

Someone will then tie the yarn with strands of the fique plant, and tie that extremely tight in various places on the yarn, in a process they call the “resist” part of the Ikat weaving, similar to hippies doing tie-dye shirts. The goal of the resist is to make sure that no dye applied to the yarn will spill into the area tied tightly, so as to make plain sections in the product’s ultimate design. These will go into the design phase, so now you understand that if you don’t want copycats, no one is to know your patterns.  This phase can last a long time while waiting to dry, in efforts to have the patterns come out to be very crafty, tricky designs and patterns. Doing these tricky weaved patterns is known as WEFT Ikat weaving, the most difficult version of Ikat weaving.

Then they will dye the yarn, so that explains the various pots that are nearby the yarn, to hold the dyes. I didn’t know that this family can make dyes from just about everything from plants, to berries to insects, to even rocks. How do you get dye from rocks?? They do it! For instance, from this insect, the cochineal found around cactus a lot, and it produced the bright red dye carmine. Or they can throw lime juice on some insects’ liquids and change colors. They can use walnuts to make brown colors, earth-grey are what the rocks are for. They’ll let the yarn soak for long times, even up to a couple of months in some cases, to get the dye buried in there, and they will boil to get the dyes to remain permanently. The colors actually last!

Doña Anita explained that she can use a method, in her Ikat weaving, which sets her apart from others around the world. She took us to a bunch of yarn that was set up to dry, which she tied up every 6 inches or so. It was not a final product, it was the fibers being hung up to dry with dye already on it, but it was time to remove the resist ties. She mentioned that other people wouldn’t have this method, where she dyed the wool but clearly had not woven it up into an article of clothing yet. Others would make the clothing first, and dye that clothing last. This is why her works (and I agree) catches the eye of the person looking at the fine line designs. They can make some incredible patterns and layers this way.

Then it’s just stitched together with the backstrap looms (while the person sits on the floor with strap pulling the yarn to manuever, or looms with pedals).  Everything better be dried and done carefully so as to not screw up the patterns when weaving, and all of that time waiting for the dye to dry. Since this is all hand-made, that increases the possibility that what you receive from this shop is going to be different from the one someone else bought before or after yours was produced. The levels of dye change article to article since it’s not mass produced. Industrially produced ones are all exactly the same, so getting a few shawls from here was a beautiful and unique experience. I’d go for unique over something everyone else has the same exact make of.

Unfortunately, many people are modernized and the traditional clothing is not what’s the fashion in Ecuador, so likely, tourists will help make up the money from this dying dying art. This explains why I only saw older people wearing the garbs, or younger women who were performing in traditional ceremonies were wearing them. Today, you’ll see many of these Ikat clothing being done by machines today with synthetic materials. This is what you’ll find in the highlands of Ecuador if someone is casually sporting them, people are getting the mass-produced fake Ikat. Because of the historic value of this art of Ikat Weaving, La Casa de la Makana is now an officially UNESCO recognized site (I think now it’s reference as “Casa Museo de la Makana”), so I hope the tourism and business pick up, and the historic cultural art form is preserved. Actually, they have stepped the game up so right now, the family has a new site and swag going on. They will tackle this fashion problem of modernization and ones I brought back must have been the pre-designs for what I see on their site now. Go HERE to check. If you have a South American lady, hit her with something from there and she will love you forever, as it will be UNIQUE!