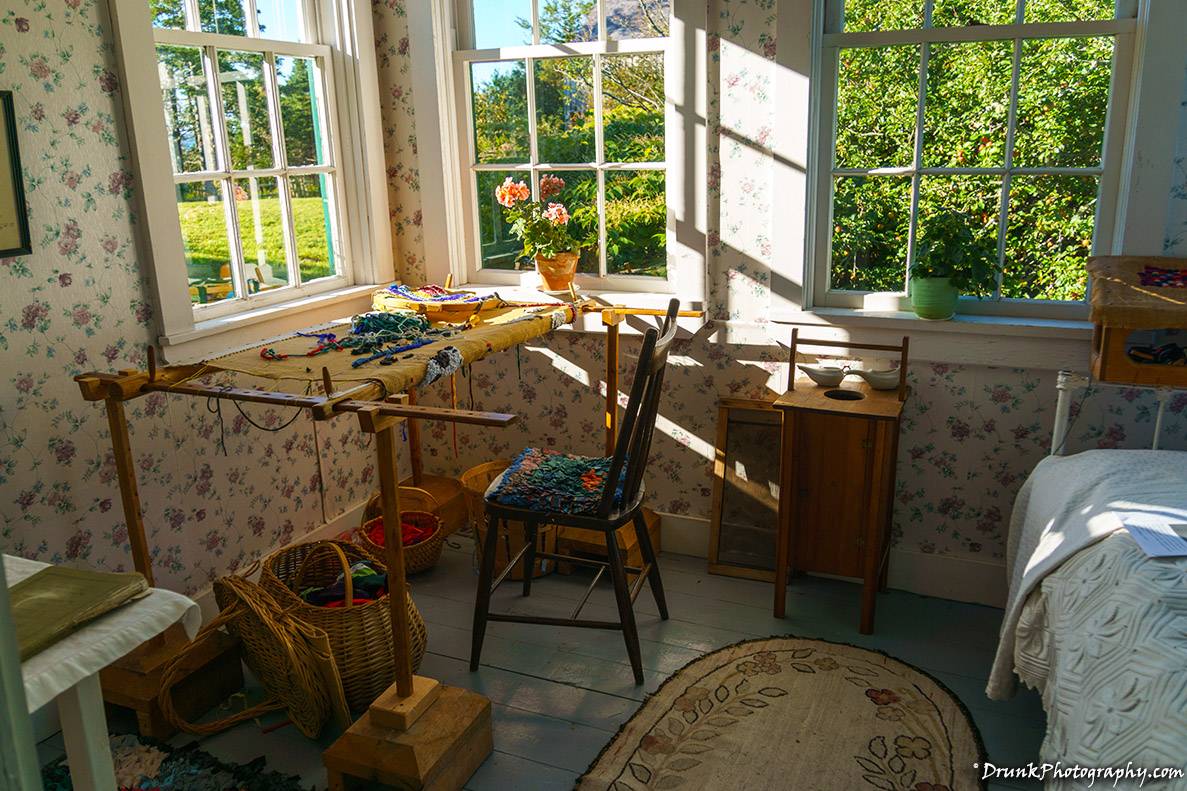 It should be named the Fisherman’s WIFE Museum

The Fisherman’s Life Museum might be really small, but it can be found advertised in everything from Triple A’s site to any travel site talking about Novascotia, Canada. That kind of made Novascotia seem like a place with not much draw, outside of Halifax, but with me being the kind of person I am, it made me more curious. When something gets that kind of press but is so obviously about life in simple, historic times, it’s going to get my attention, and I definitely have to get out to see it. The odd thing was that the most intriguing bit of information about the museum was that it’s actually a house, with historical value, not a traditional museum. It’s about 1/2 an hour’s drive east to get to this museum, from Halifax, Novascotia, Canada so if you make it there, you will need to treat yourself to a visit to the house. You almost can’t miss the place, because if you drive the rim of Novascotia, it’s RIGHT on Novascotia Trunk Highway 7. Novascotia is a pretty “dry” place, so if you have run out of things to do in Halifax, you should head right over to this place.

Back in the early 1900s, the house that is now the Fisherman’s Life Museum, was the home of Ervine and Ethelda Myers, of Jeddore Oyster Pond, Novascotia, Canada. It was passed on to the family by the Ervine’s father, who built it in the 1850s. Back in those days, the Atlantic Ocean was used as the waterway to get people around Novascotia, and back and forth to one’s property. Ervine was a local fisherman to the area, and he’d have to ROW his boat out 10 miles just to get to the area he would have to set up shop. While they could have lived closer to the ocean, that would be foolish, because the weather is crazy by any ocean, so it was smarter to take the home given to them, further inland, where it currently resides, where they’d be better protected from the elements. For Ervine, that led to a lot of time out of the house, and much of the year spent out fishing all Spring to Summer, or in Winter, out working in the lumber business, producing pulp for sale. This left Ethelda home with the 13 girls, much of the time and that meant that the way the home was tended to was a big task for Ethelda. Having 13 kids came in handy to not only keep her company, but they provided extra hands. The children all grew up learning the skills it took to keep a house up. Many of the rugs that were seen here there, were done by the daughters in the home. The kids grew up and tended to the Fisherman’s Life Museum home long after the parents died off, which is why we still have the Fisherman’s Life Museum in great shape today.

The family was also skilled with farming, especially the Ethelda and daughters because they would have to harvest while Ervine was out fishing, in true Hunter-Gatherer style.  The work by the whole family was crucial to their survival, and these actions were the sources of revenue and food, for most people in this region, at the time. So when you walk around the house, you can see it’s not really about fisherman’s life, it’s really a highlight of how well Ethelda, kept the house. I was trying to figure out why all of the husbands and boyfriends who were present when we arrived, were not too interested with the house. The guys just went outside and just talked the whole time, but the women loved walking through the house. It’s because it’s a HOUSE. So the museum is really a testament to how efficient Ethelda was, in my opinion, so I call it “The Fisherman’s WIFE Museum”.  Think about it, Ethelda had to have been extremely efficient in parenting, home-making skills, and harvesting, to be able to balance the budget. Along with keeping food going for the family especially with Ervine being out on the water or doing lumber most of the year, that was a pretty big undertaking for her. If Ethelda wasn’t on top of her game, the family would not have survived, all respects due to Ervine, of course.

The Myers ended up having 13 children together, all of which were girls. There were actually 14 children, but one girl died as an infant. Infant death was always a real treat for couples, back in those days. To counter this, many in earlier lives tried to have many children, to help out to build the homestead and also to take care of the elders. The museum had various children’s’ rooms that I discovered while walking around. I couldn’t imagine how in the world they were able to fit 13 children in these small rooms, and then the 2 adults too. It seemed as if every room I went into had a bed in it, and then there was even 1 room with 1 adult bed and 3 baby cribs in it. It was pretty tight in that place, and you could hear every single footstep on every inch of the wood floors. You could hear conversations all over the house, I could never live in this house, back in the days. I’ve not seen this kind of cramping of people in 1 structure, since.. 5 minutes before I arrived at my apartment today, as I just remembered that every other 1 bedroom apartment in my building has at least 2 kids and 2 parents. Move them to this f#4cking museum to live!  Ehhh?!

When you walk the rooms of the house, you’ll notice that there aren’t any fishing-related things laying around, so it’s more about the re-creation of the life back then, with artifacts of housekeeping laying around. This is why I noticed the other men didn’t care for touring the house after looking at 1 room. The women LOVED every detail. I couldn’t believe all of the old stuff there. I did a free roam rather than the tour, but you can speak to the guide of the house, eat some biscuits she makes, and she will instruct you about how everything in the house was done. So really it’s about how about how the women lived if you think about it.

The Myers children were also taught how to preserve food for storage, to last harsh climate like the winters. Before winter, the family had to harvest in the gardens, producing blueberries, rhubarb, all kinds of veggies and hops (for yeast). There has to be quick crops because weather dictated all then. These items had to be crops that would ripen pretty quickly because the seasons couldn’t be trusted to properly farm all kinds of crops. Failure to pick the proper crops would result in starvation and sickness, for sure, but this family had to be on a strict diet obviously. The area was not exactly the best kind of land for crops though, mostly scrub forest, rock-filled areas, and bogs. Ervine also had to be highly skilled to build/repair the housing, barn, and wharf! Some of his tools of the trade could be seen in his tool-shed.

Walking the area you can check the other things that Ervine built or maintained, and go down to the wharf to check the fishing store. I wanted to use the earth closet with a crescent moon on it, but it’s just for show purposes only. One structure caught the eyes of many people, and many debated its significance and the shithouse it was that structure. The earth closet is just a fancy name for an outdoor toilet. People wonder what the crescent moon on the earth closet was, my explanation is it was the universal sign for “Ladies Room”, back in the 1800s for people in the West, and well before that. Men’s outhouses probably were worn down and fell apart so the only ones standing were the women’s earth closets. We probably associate just think it’s unisex, but that would not seem logical considering how separated sex-based things were in older societies. Many also believe the idea that the crescent moon on the outhouse represents “Ladies’ room” because of the people being illiterate back in the days, and a sign was needed to differentiate sexes, like men and women body differentiation in symbols for today’s bathrooms. The moon is a nod to “Luna” or “Goddess Diana” who is the Goddess of the moon, a welcome feminine symbol for women who wished to come to take a womanly dump. You get it, right? While Novascotia is kind of boring, there are sprinklings of historic things spread all about, but you’re going to have to find them.