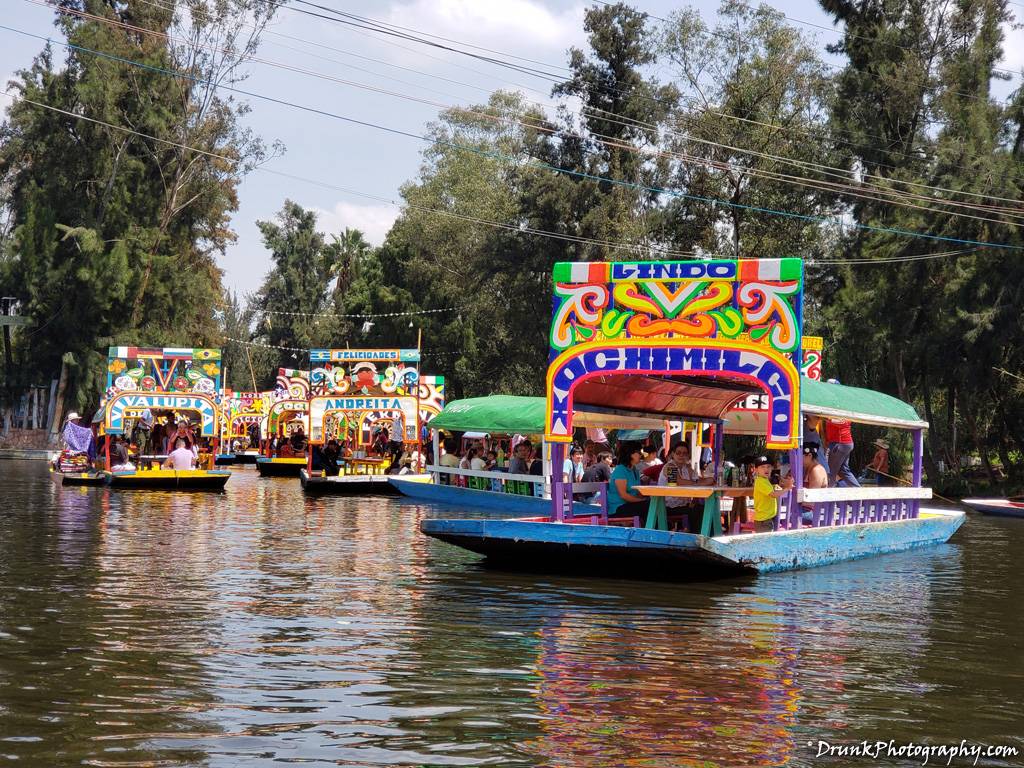 I decided to venture out to something other than the immediate area of Mexico City, Mexico, after seeing an advert for some very colorful city with flowers or something or the other. I wasn’t exactly paying attention, but was getting bored so just decided to travel about an hour or so South East, to a town called Xochimilco. I know, sounds really hard to pronounce but it’s not actually. It sounds like this “SO CHEE MILK OH” – Xochimilco. 😊 See, that wasn’t so hard, now was it? That name is not Spanish, if you’re wondering. The name “ Xochimilco” draws its name from its roots in the pre-Columbian language “Nahuatl”, with “XOCHITL” + “MILLI” loosely translating to “where flowers grow”.  If you read my post here, you will see, Mexico had a deep history WAY before any Spaniards ever made it there, and it’s worth investigating the origins! Xochimilco was made a UNESCO site in 1987, and is therefore a popular location for locals and tourists alike, especially on weekends- probably would have been best to go on a weekday to beat the crowds, in hindsight. I booked a tour that would take me around the city first, then eventually cap the day off with a trip to Xochimilco, just to make sure I could fill the day properly with activity.

When I arrived, I saw color radiating from this place with all kinds of pretty flowers and shops, then right down below was a little body of water. Then I saw what I clearly wasn’t paying attention to when originally checking out the place, there was the famed Mexican Flat-Bottomed boats called “trajineras” which stems from the Spanish word “trajinar” which means “to transport” something from one location over to another. So, these are boats that transport things (e.g., goods, humans). I was confused because (literally) just 1-minute prior, I was just in a city landscape, and suddenly I was now in a jungle-looking setting seconds later with a body of water running right through the middle of it!

The trajineras were decorated with flowers, has long tables on them and chairs to sit on. Everything was painted and decorated very colorfully, it was clearly meant to create a healthy, positive vibe. Each of the trajineras were also named after a female, like you see on the sides of many boats today. I was looking at trajineras like what was going to power them down this body of water because the body of water was not flowing like a river would flow, there was no current, therefore it was a lake. After looking it up, it was Lake Xochimilco that I was seeing. Then I looked at that lake water, it looked dirty as hell, like a swamp, but it did not smell like a swamp at all. It was really puzzling. Given its proximity to the city folk, I was surprised this wasn’t a sewage wasteland by now.

After boarding the trajinera, and getting myself a few beers for the ride on the water, I saw a guy suddenly board the trajinera then he started handling this huge oar.  It became clear that this was a gondola, and he was going to navigate us backwards and then out on the still water.  Actually, this thing couldn’t even be a gondola because you can put like 25 to 30 people on this trajinera, with a full mariachi band, so this trajinera is its own definition. I asked my guide about the distinctions, and like many locals I asked previously, kept referencing the floats as the “flat-bottoms,” and how I had to go to Xochimilco because Mexico was well known its wide, flat-bottoms. They reference it this way so you don’t confuse the with Gondolas.

So, since this was a trajinera, that would make the driver officially a “trajinero,” a driver of a trajinera. Well, the trajinero didn’t have a buff body like a weight-lifter so I quizzically looked at him like “how is this guy going to haul all 10+ of us on this thing? And what if a Mariachi band gets on??” This trajinero had super strength or something, he was eating Wheaties for sure because he quickly turned us around and got us out an on the water in less than 1 minute! You know the rowing machine at the gym and how you can’t last on that for more than 20 minutes? Well this dude was going to do for 1hour, with us!  Ay Dios Mio! I asked about the water looking dirty but not smelling dirty and my local guide took my finished beer bottle and dipped it into the water to take a sample for us to see (yes I finished my first drink just by the time we turned the trajinera around- sue me LOL). It was clear as day, so that “dirty” look was not dirt, it was the algae that is beneath the water, which was deep green. It was explained that in the early 90s, the Mexico Government made it illegal to trash the place, which is why it’s been preserved there.

As you go up and down the canal, you will see all kinds of people making their grinds, out on the water. There are people tending to the floating gardens bka “Chinampas”, playing Mariachi for you, selling you some local foods or junk food (for kids), etc. The atmosphere was super positive, everyone was festive out there, even the trajinero. I can say that Xochimilco properly captures the vibes of Mexico, in my opinion.

People were out hustling, on their grinds, enjoying life and eating food at the same time. I was getting hungry but had a big meal planned later, so I called over a guy to send over a few bags of chips…

While waving over the trajinero with snacks, I saw a crowd of boats passing by the area behind looking in horror at this strange looking place in the corner. I didn’t pay attention initially, but as my buddy was paying, I looked up and then I saw THIS disturbing scene right over his shoulder… 😕

…a bunch of dirty, baby dolls, strung up in trees and hanging on strings or tied to fences. Really creepy scene out of nowhere, and was killing my buzz. Many people got close to look at that, but if you know Santeria like I know it, you stay away from odd people with dolls and chickens with heads cutoff! They call this section “La Isla de las Muñecas” bka “The Island of the Dolls.” We all told that trajinero to GTFOH immediately!!! What kind of pyscho would do this? I’ll tell you who, the Mexico Government’s Head of Sanitation, who owns that land and lives there! 😀 LOL Seriously, that is who owns that area and those dolls are all from the garbage dumps. It’s not a tourist attraction complete with a sign that reads “No pasar PUTO”.. which means “Don’t pass, {substitute your favorite derogatory slang term for a same-sex-preference male here}!” WHY???!! Is that there? You can click the inset pic for a glimpse of crazy dolls. 😕

That oddness is a tourist attraction too, apparently, so, don’t be afraid to get over there if there is enough room, or bring a camera good enough to zoom in on that nuttiness. All in all, it was a beautiful cruise down the lake and I was able to soak up some much needed Vitamin-D from the sun, listen to good music, drink great beer and down some local food while floating out on the water, which I try to do anywhere I go if the opportunity presents itself. At the end of the float tour, I checked in on our trajinero (Alberto), to see if he was tired. He was clearly NOT tired, didn’t even break a sweat even. I asked him, in Spanish, what he does to stay in shape to do all of that rowing all day every day. He answered me, in English, “BEER”.

P.S. He actually said something ELSE too, but uhmm … in good “taste”, I can’t write that here. 🙂