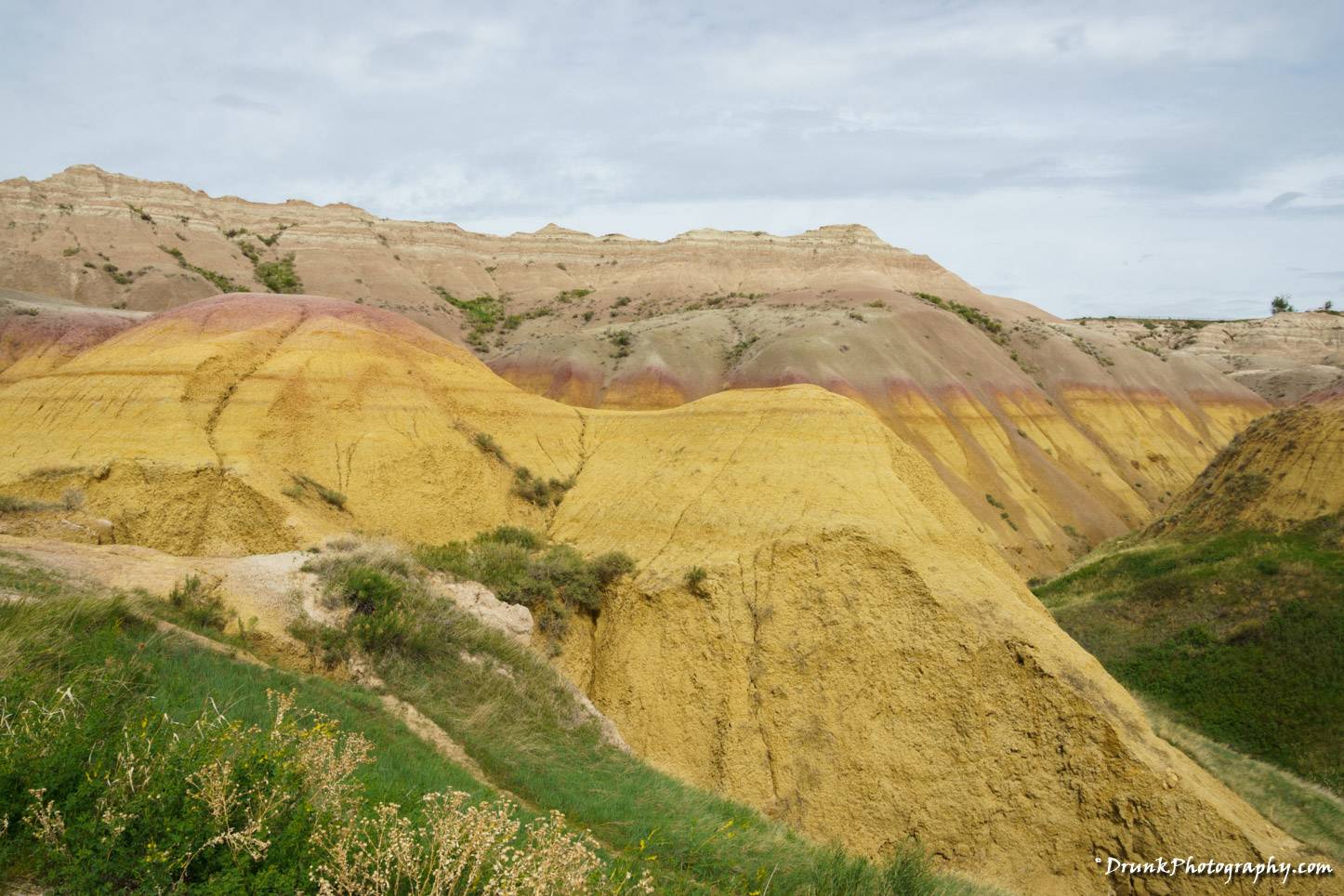 Tucked in the Southwest of South Dakota, USA, I made my way to something I had never heard of ever before, the “Badlands”. I asked a bunch of other people about this place, people who have explored many National Parks already and they also had never heard of the Badlands. It turned out that the Badlands was the location where 2 top movies about Native Americans lives were filmed, Thunderheart and Dances with Wolves, so it’s well known. I’ve seriously been on a vibe since visiting the Badlands, and I’ve been trying to promote getting more people out to see this place. The problem is it’s in South Dakota, where many people are not thinking about going, on a vacation, as they don’t think there is anything there to see- I promise you, there is MUCH to see. If you like geology, if you like odd colors and shapes of the earth, and wish to be puzzled about looking at strips of land and rocks coming out of the ground, Badlands is for you. If you think Bryce Canyon is some incredibly confusing geology but looks absolutely beautiful in all lights, then you need to get out to the Badlands to see some craziness of the earth, all up close. Badlands has all kinds of geology mixed up, all over the place, it’s like no 2 places they’ve set up in the park, are the same. I was starting to believe that someone from the park’s services must have gone around and artificially carved out some of these rocks, or maybe took some spray-paint to the side of some of these rocks and painted them.

The area has historically been ridiculously hot in the summer, extremely barren and dried up, and freezing to death otherwise, which plays into the name. The name “Badlands” was first called the “Mako Sika”, a Lakota Native America term meaning “land bad”, as in “this land is terrible for trying to grow anything because NOTHING is ever going to grow in this area”. Like Bryce Canyon, you have a bunch of valleys or gorges, spots where you see grass or limited greenery, pinnacles, buttes, and hoodoos, but it’s not a uniform look like you would see at Bryce Canyon. The Native Americans were right, there isn’t anything out there as it’s very barren, but pure beauty exists there due to the geology itself. The Badlands were formed by 2 types of processes, one is Erosion and the other is Deposition. Historically, the Black Hills’ bodies of water used to flow rapidly through the Badlands, more than 500,000 years ago. The sediment that makes up various parts of the Black Hills then made its way into the Badlands, and landed on the rocks, calcified, and build the layers that make up the interesting look that is seen in the Badlands today.

Those bodies of water carved up the Badlands’ rocks and made up the striations you see. The interesting layering that can be seen in the Badlands is the process is called Deposition, which is just that deposits of the sediment that flowed down from blown land, sea, etc, and landed in layers over time. The rocks formed are actually combinations of clay, sand, and silt from over 75 million years, through different periods of earth’s developments. That sharp peaks and pinnacles (called Sharp Formation) are from the wind and weather elements shipping away and creating those sharp edges. Then you add in the volcanic eruptions, ash and that’s the bulk of the chopped up terrain that is seen (known as the “Rockyford Ash”).

The colors of the badlands came in layers that are also with names, but all came from the passing Black Hills waters and sediment left over from erosion and deposition. The tan layers are from the sandstone, the red is deposits from fossils and those together are known as the “Brule Formation”. The grey layer is a big mix that contained the former forests and fossils of species that lived in the area at the time it was formed. It’s theorized that it could have been like a tropical forest because there are a lot of signs of alligator fossils in this layer. So it’s said that the Badlands hand a lot of flooding when this layer was made. They call that the “Chadron Formation”.

The colors that make up the “Yellow Mounds”, they are the most fascination. The sea level fell, the mountain ranges rose, and the leftover fossil deposits, the weather blowing the rest of the mixes of sediment then formed the yellow soil portion of the mounds, plus the bit of the Brule Formation bringing in the red color to highlight the Yellow Mounds, make for some of the most impressive natural colors seen in the Badlands. Probably the most photographed things you see, of the Badlands, are the Yellow Mounds. When sea level fell, the sediment dropped by the sea left black deposits, which are what make up the black mud that hardened into shale.

If you get as hyped as I do about this stuff, you have to stop at the Ben Reifel Visitor Center, where you can purchase all kinds of information about the Badlands and its makeup. The park is set up in a way where you can drive through it and see the great majority of it, but you’ll want to get out of the car to check this stuff out. The parks services have made the most of this location. People were out with the phones and GPS doing things like these challenge HERE. It’s a great way to get the kids motivated in the beauty of nature in Badlands. You can see a lot of wildlife out there, despite it being so barren, surprisingly enough. They even re-introduced the Black Foot Ferret to this area, so that it would not become extinct, this was a good environment for them to make the comeback in. Every time they turn around, archaeologists are finding newer and newer fossils in the Badlands. You might even find something like skeletons of camels and even saber-tooth tigers! You can’t take anything back without, that’s illegal, but you never know what you’ll find out there. Now that I know they have hiking, and even allow camping, I’m up there when the weather gets better.