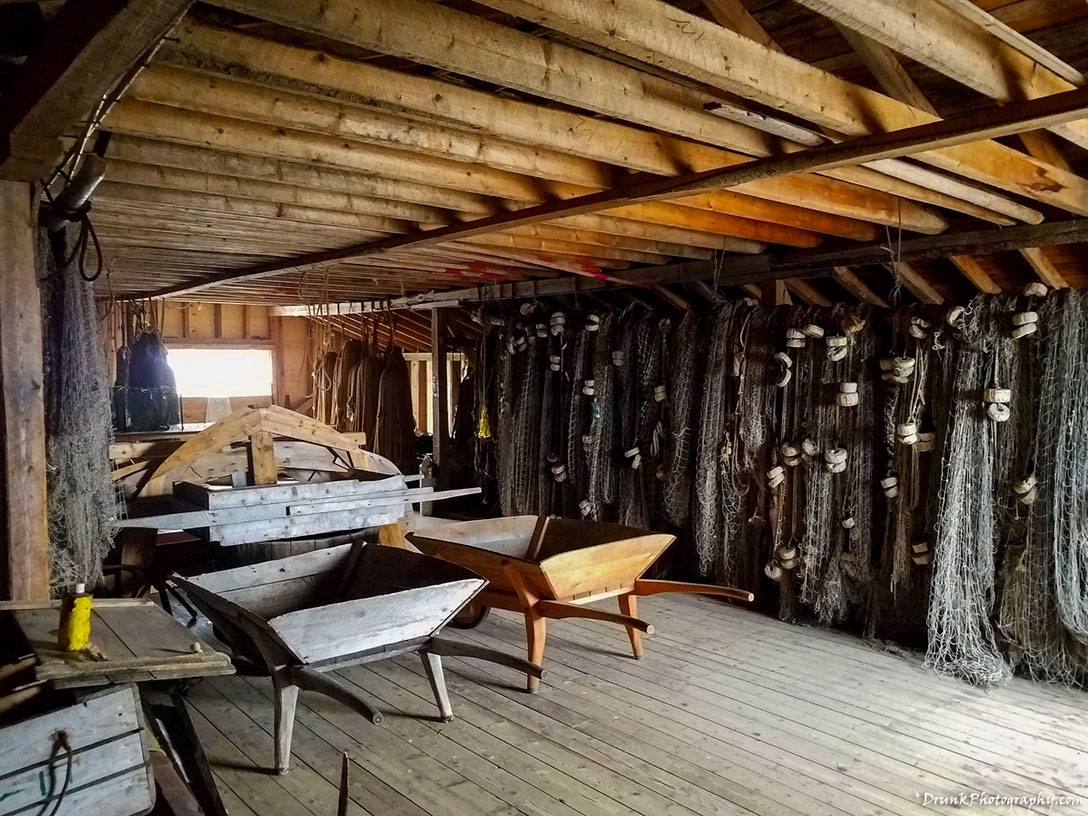 Located on the outskirts of Gros Morne National Park, on the coast of Newfoundland, facing the Gulf of Lawrence is a famed fishing area called Broom Point. Broom Point was once an area inhabited by the first national group of the Palaeo Eskimo, and later replaced by the Dorset, and has a long history of fishing culture. In the 1800s, it became the go-to place for local fishermen of Canada, because fishing exports out of Newfoundland were huge sources of money for the British, especially since they had to compete with the other colonial nations.

Obviously, currently, the area now doesn’t represent what it looked like back then, most notably now there is an easy way to get to Broom Point via an actual ROAD leading there, so it was a hidden jewel initially, before the modern world caught up with it.  Imagine, if there were no roads, the land had to be tough to navigate, which meant everyone and his mama couldn’t just roll through and overpopulate the fishing waters. Only small parties would know about this area, and not many would bother to navigate unless they were truly about the fisherman life. Hell, it there was no roads, it wouldn’t become a place that any casual tourist would venture to go because it would involve a small hike they’d certainly not make. So, the advent of roads and better transportation to Broom Point lead to the area not being a secret, and soon after, the opportunists of the modern world made their way to Broom Point and just polluted the area with themselves, killing off the old school culture of fishing.

The area later fell under the control of the Mudge brothers, in the mid-1950’s to 1970’s.  Their families, would frequent the area for fishing, and from this point on, Broom Point has been associated with that family. They wouldn’t go there to fish all year round, they would fish only during late spring to end of summers, and bring the family.

There is a cabin there, with some wood logs outside, to show you that they had to produce heat/fire with the logs they chopped down from the neighboring areas, which would go into the stove in that house.  The Mudge’s would fit all of their family members in there when they came through. If you venture inside, you’ll see the cabin only has a few bedrooms and the kitchen, but I’m not sure how they fit everyone in there though.  I was wondering why I had read somewhere that they only came through for Summer, but they had all of that wood on display as if they chopped a lot of wood for heating, Summer nights couldn’t possibly that cold.  Well, I found out that there ware there are early as April, and it’s pretty cold there at night still, which explains the chopped wood setup and stove for heating the cabin, as well as cooking.  On the tour, definitely get in there to check it out.

Walking the land, and inspecting their equipment, I saw a lot of cages, so these were obviously lobster cages, so lobster was big here, but I did a tour here so I learned that they also had a lot of Cod, and would use the huge rocks that are just outside of the re-created fishing store on site, where they would cut that cod, and leave it out to dry.  This was the location of embarking and disembark for boats apparently.  The guide that I had was an official guide working for the government, and he gave me an excellent bit of knowledge that put a lot of things into perspective for me, as it related to the West Indies, and this Newfoundland. Caribbean folks in the West Indies LOVE “SALT FISH“. People can’t go 1 day without eating it, it’s huge in the West Indian cuisine.  Did you know that this “salt fish” was very same salt fish that were set up in the arrangements like I just described, by fishermen like these, who put that fish out in the sun to dry, with the salt? Yeah.  If any of the fish happened to go bad (a lot did), and it was deemed too rotten for the productive export, the Brits would ship that fish to the West Indies, where the colonial slave master oppressors would feed the slaves in places like Jamaica!:

The cod business was very competitive, so they had to make the wastes go to use. Slaves in the West Indies worked under heated conditions, producing multiple products from sugar canes like sugar, molasses, and rums, so the bad fish was a cheap way to feed slaves, so technically nothing was wasted economically. So much like slave owners in USA fed African Americans slaves all of the pig slop parts that they didn’t want to eat themselves, like intestines, tails, feet, noses, etc, African Americans ended up making that trash a major meal called “CHITLINS” (Chitterlings). That became SOUL FOOD, like disgusting rotten salt fish became the West Indian version of Soul Food. YUCK!  I have eaten salt fish since my youth, I had NEVER known that THAT was its origin!!!!  I won’t be eating that again!  lol

In the end, Newfoundlanders joke that Jamaica got its revenge on Newfoundland because they sent back the worst rum ever produced in this world, “SCREECH” , which Newfoundlanders felt they deserved for what their hands in the sordid past, and now that’s the OFFICIAL drink of Newfoundland! lol It’s called Screetch because when you drink it you let out a disgusting Screetch, and to get Screetched in, you MUST kiss a COD. lol