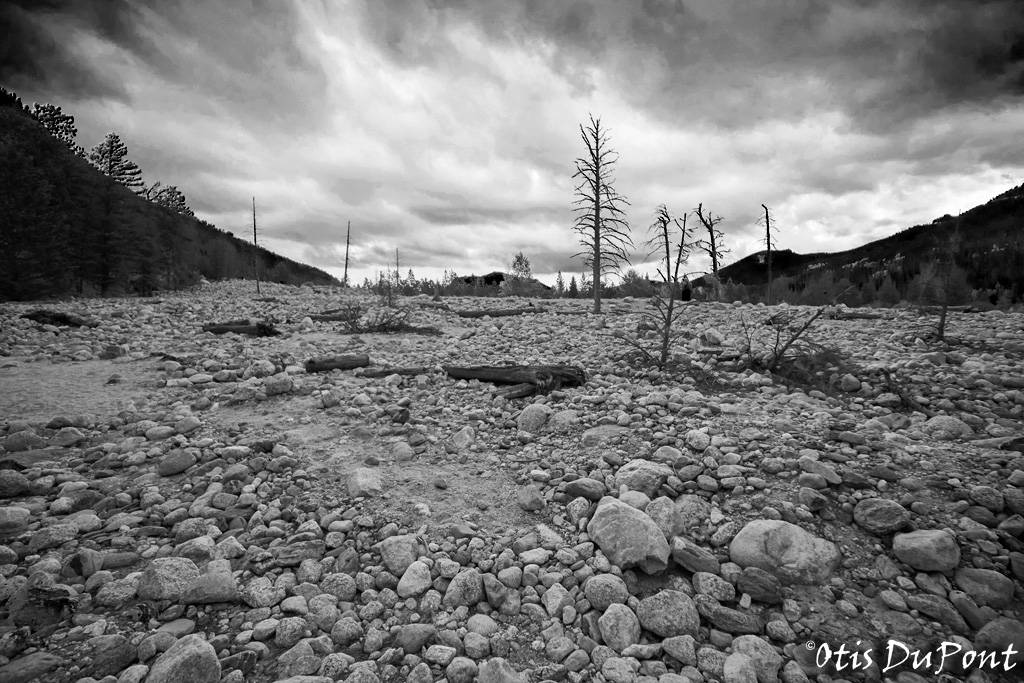 If you take the Rocky Mountain National Park’s “Fall River” entrance, and continue about 5 kilometers to the West, you have to keep your eyes open for a place that looks like flattened meadow and a million boulders, and pieces of boulders, laying all over the place. This is the “Alluvial Fan”. You can’t miss it, but I’ve had people tell me that they drove by and never knew what it was so didn’t bother to stop. Well I’m going to tell you that you SHOULD stop, and hop out to see what is flowing up there. The first thing that came to my mind was why the hell are all of these boulders all over the middle of a meadow??!! I had to do some digging because my brain was all over the place with curiosity.

How many millions of years old is the Alluvial Fan?

You see, back in 1982, north of that area, 10 miles north west of the entrance sits Lake Lawn, a natural lake that was formed by former glaciers. An embankment dam was created, the Lake Lawn Dam, to keep the lake in check. Well, the Lake Lawn Dam is no exception to failure, as it was created in 1903 and was used mostly for irrigation in the area. At this time, it was owned by a small company that handled irrigation- yeah you could own natural resources back then, before it was made part of the Rocky Mountain National Park. The failure lead to a cascade of flooding due to the massive flood that reached all the way through the Rocky Mountains and all the way through to Estes Park. The lake’s elevation was 11,000 feet above sea level, but this part of the Rocky Mountain National Park wasn’t well maintained, so maintenance was not performed in and around the area, as it was incredibly impossible to get to, as the area became more and more ignored. Since no vehicles could pass, no one bothered to think about this area, mind you, the dam was already created and up there this whole time, almost fortified (from human passage) by nature enclosing it in. So, wait, so how old is the Alluvial Fan? The Alluvial Fan is only 34 years old! Not MILLIONS of years in the making, which you would think if you looked at it.

What does the Alluvial Fan have to do with dams?

If you know me, you know I like to inform about failures of engineering, especially damned dams, like in these posts: GLEN CANYON DAM and the BONNEVILLE DAM. By 1915 that whole area got swept up in the land grab that would become the Rocky Mountain National Park, but that didn’t mean anyone was going to suddenly start maintaining the dam. In fact, they knew of issues with the erosion of the pipework in every inspection of the dam from 1951 to 1978 and STILL ignored it, that combined with how impossible navigation was, that spelled trouble for the area. The upstream facing portion of the dam had its eroded pipes break, which eventually led to the immediate collapse of the ignored dam’s structure, and more than 30 million cubic feet of water rapidly flooded everything south of the location, again, the lake sat at 11,000 feet above sea level. That produced raging forces of water that were unspeakable and caused tremendous damage to everything south of Lake Lawn, riding down the Roaring River southward, creating 30 feet high flooding waves of water, down a VALLEY!!!  This took all of the debris and dumped it in Horseshoe Park, where you now have it marked on maps as the “Alluvial Fan”. So if you take that entrance that I spoke of earlier, that FLAT area, that’s Horseshoe Park and because it was so flat, that led to the thinning of the flood and the flood was contained there. Estes Park, the town, was under about 6 feet of water.

The huge truck-sized boulders were carried all the way 5 miles south and swept through the valley, smashing into the millions of tiny rocks and boulders you will now see in the Alluvial Fan. This is how they got there, although many don’t know this. It just looks like a pretty little waterfall there, a light stream and a million rocks and boulders sitting in the middle of a meadow for no reason at all. That was a recent creation, due to negligence of the park maintenance people, which will surely not happen. Why? The flood produced forces of water on the Cascade Lake damn sending 4 feet of water OVER the top of the dam continuously, which gave way and flooded the Fall River and again flooded Estes Park.

So, from that chaos the MAN-made dams, and lack of proper maintenance and engineering, you now have the Alluvial Fan, and by extension, the “Lake Fan” which was created when all of that heavy debris mowed down everything in its path and dammed up to form Lake Fan. Now, you have a cool tourist stop. 😊