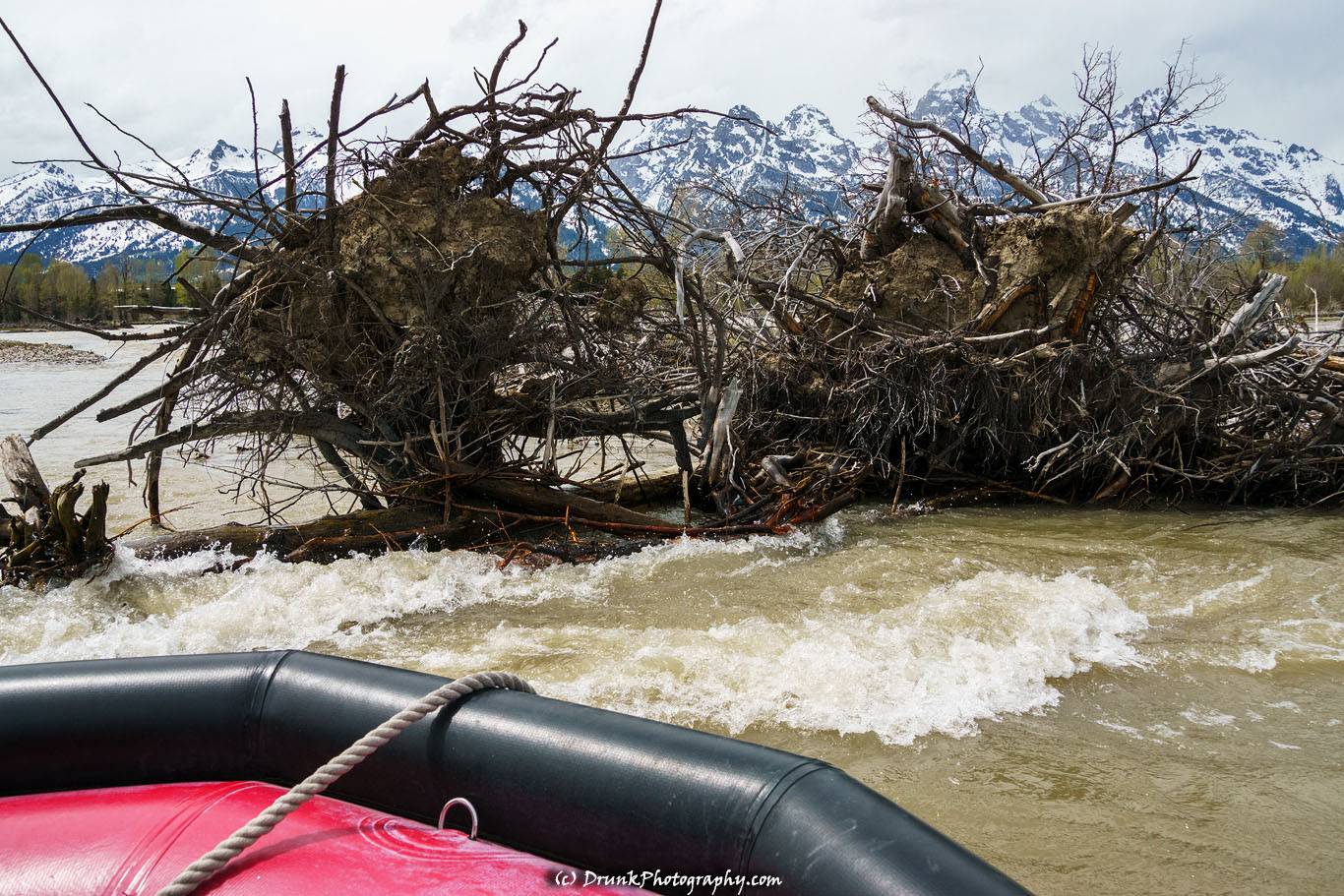 While out in Wyoming, I wanted to experience the beautiful scenery not in a motorized vehicle, for once. I don’t live anywhere near any great mountain views, so just being able to look at mountains that I normally only get to see in other people’s photos, it was a little bit of a big deal for me. It gets kind of frustrating to see great scenery but you can’t look at it because everything is flying by at   65 miles per hour, through glass windows, while you’re on a US highway. I also wanted to get a different look at the mountain view, from a unique perspective, and I couldn’t think of a better way to do that than how I did it this time. I like when I get an opportunity to cruise slowly through mountainous regions, while I just kick back and relax. I learned how beautiful that could be when I was in the Amazon river, on a balsa raft for 2 hours, despite it being 100 degrees. I realized that despite the weather, you can be so locked into the scenery that you will not notice the weather. Sure, you’re going to be looking left to right so much that you are surely going to come out with neck cramps, but it’s from looking at all of the beautiful surroundings, and that’s a good thing. Back home, on the East Coast, we don’t really get time to take a minute to appreciate life, so we don’t know to look at something with natural beauty and take it in for longer than 30 seconds before we dismiss it.

I think that if people could get out to the wilderness more often, to see nature, there would be a lot fewer people using and abusing prescriptions drugs. Seriously, if the people could look at the beauty of things around them, they would learn that they can see beauty in something so simple as a tree. I noticed that even showing pictures of nature to people from large cities, didn’t elicit any real form of positive response from them. They just look at nature like it’s nothing and they’d rather look at cold looking buildings and neon signs. When I showed pictures of nature to people who had actually spent time in nature, it seemed to get those people to reminisce about times they went on a trip to nature, and they share how relaxed and released they felt.

These people whom can relate to experience are the people I see, and it’s just lacking when I connect with people from large cities. I started to spend more time with people who had been to nature and appreciated it, not all super hippy or anything, just people who like to go outdoors, rather than stay in apartments doing nothing but watching other people going outdoors, on TV. That’s can’t be healthy for people, and it’s ridiculously cheap to get to the outdoors and do simple, things. My favorite thing to do is do floats down rivers, and wherever I can find something like that, I do it. I’ve done it in hot weather, and here I did it in cold times and I still got the sensation that I liked. I’d much rather spend my time around the beasts of the woods in Wyoming, than the beasts of any big city, any day. I saw that there was an opportunity to float down the historic Snake River, which is a very famous river due to it being a marker for the Pioneers, in the 1800s. Since we were near Jackson hole, we went up to Jackson Lake, near the Deadman’s Bar, and embarked on our float trip from there. I convinced a group of people to go, although it was ridiculously cold, boy did people express that they were happy they came along for the ride float. Most had never done any sort of rafting so they were nervous, and the rough Snake River provided a thrilling ride, no matter how experienced the navigator… and then I looked at the waters on the way over, and I saw that water was pretty rough looking out there. The tide was low but it was still with a lot of splashing and rushing when I saw it from the road.

The Snake River is the largest river that connects to the Columbia River and spans the states of Wyoming, Idaho, Oregon and in Washington state is where the Snake River converges with the Columbia River. Its reach through all of the states is from when the glaciers, volcanic eruptions, and lava flow, during the ice age. It’s a very popular river that is rich in Salmon, so it’s not uncommon to see a fisherman in that areas that were chopped up and set for people to be able to fish where I was at. Snake River used to be a major river that Native Americans relied heavily on it, not just for food but for navigation through the land. When the Europeans came and met with the Native Americas, the Europeans wanted to know what they called the river, and the Natives made a motion with the hands wiggling the hands in the motion of fish swimming, to signal that there is a lot of FISH in the river. The Europeans misread that and said “oh great, it’s a Snake? Got it SNAKE RIVER”. DOH!  lol Seriously, that’s how that went down. The Snake River was a very significant geographical marker for the White Settlers of the USA, as it was used for navigation as they made their voyage of the famous Oregon Trail.

The power of the Snake River can immediately be felt, as soon as you get in a raft. At this time, there had to be a team of people to get it out of the water properly, and I started to wonder if this would be bumpy ride or not. Surely I didn’t want to be smashing around all afternoon. I was informed that the Snake River can be tough and very dangerous if you try to navigate it yourself, and aren’t an experienced rafter. You will certainly die is what I was told, and while I initially thought they were just trying to make users pay them each time we wanted to get out on the water, to keep us from doing it ourselves, it became very obvious that these rafters were speaking FACTS.

If I took a raft, I’d be dead is what I realized, after the trip. The river is littered with all kinds of debris (albeit all natural) in all directions, a lot of it cuts off your path in the river, along with many sinkholes being there, so if you can’t spot that early and know how to maneuver the raft around it, you’re going to be in big trouble. Observing the power of this river, I knew it definitely was one had to be used to create some hydroelectricity because to not would be a waste, and I found out that states definitely tap into that clean energy alternative in from the Snake River. This idea to take advantage of how rough that river is, for power, came to states in the 1890s. Since the early 2000s, the section that I floated down was designated the “Scenic” area of the river, so that is the place anyone can raft, boat or fish for trout (my next trip idea). This was done by the Government to make sure that the rest of the river isn’t bombarded by people who will disturb the nature in the area. I didn’t really get to see any wildlife, then again I realized that I wasn’t paying too much attention because it was truly a great relaxing time. I did manage to peek over and see some geese but failed to spot any moose or anything major. My hands were way too damn cold to start taking pics too. I just pointed the cam and snapped, then went right back to making people laugh and smile.

20 minutes into my rafting experience, I started to wonder if I was crazy for actually doing this float when I could have just done this in the Summertime. The sky looked like it was going to thunder one second, the sun was going to come out it seemed, then some snow looked it was going to come down again. I really couldn’t guess the weather that whole week, so I realized that I had under-prepared, dress-wise. The skies were really cloudy, in very odd layers on layers, some really thick, some smooth and covering the whole sky in a smooth white layer, some awesome layers and patterns emerged. There was this row of tiny, puffy clouds that lined up over the river perfectly. I zoned out for a while, and just stared at the mountains against the cloudy backdrop, until I heard sounds that sounded like I was going to go off of the cliff of a waterfall, just rough waters crashing about. I looked towards the sound and saw a series of scary-looking, overturned trees that were stuck in the river, and we were heading right for them.

The main guide of the rafting was very good and had to be because he had to get around terrifying trees that fell and embedded themselves in the Snake River. Come to think of it, if the tides were higher, we might not have seen some of the things until it was too late, or they were really up on us. As the rafting started to wind down, the fallen trees and harder navigation got worse. We were turning all over the place and also wrapping around the winding that is known with the river. Any inexperienced rafter would be stuck right here with no one around to help, and the signal of the phone is DEAD out here (I checked, for curiosity sake). Had I come out here myself I would have been screwed! This one here was a tight squeeze by, but we made it! Finally, I made my way down to the end and saw a couple of buildings off to the side, but I had not seen any homes or cabins off to any side during the whole trip. I didn’t think anyone lived there but it certainly looked like the place was preserved by the side of the river, for a reason. I checked it out and it turned out to be the historic building. I made a point to get to that too, soon after.