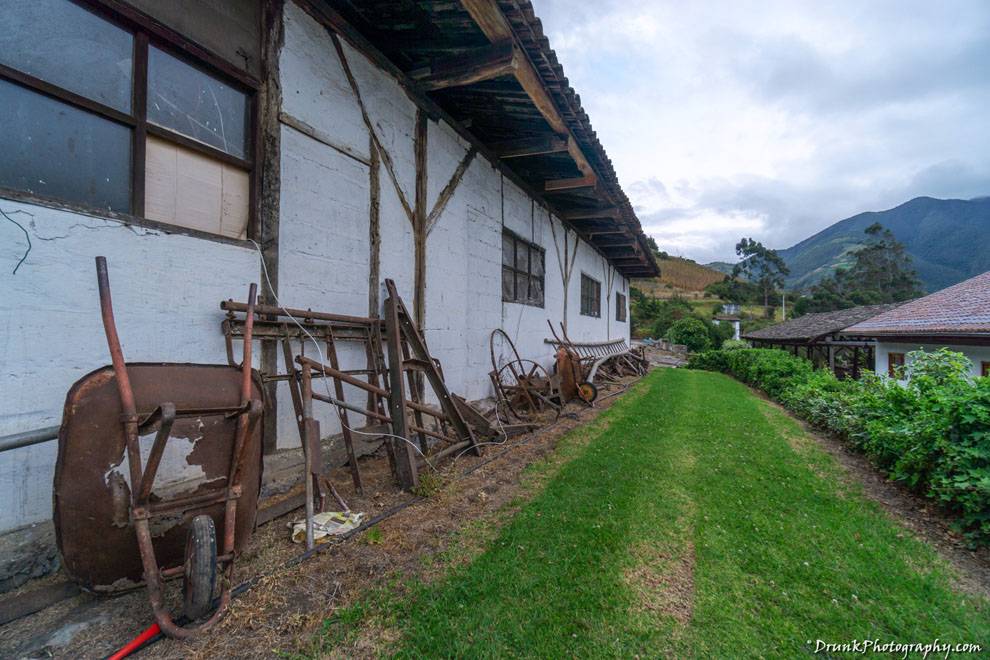 I have many friends who go down to Ecuador and then do the typical touristy nonsense, hit all the typical spots in Quito or Guayaquil, but never bother to venture out to some of the more gorgeous locations spread all throughout the country. Many of the people cite that they don’t go far outside of the cities because “there are no hotels out there” or “it’s boring out there”, therefore, they didn’t bother to get around to those areas. The problem was that were looking for traditional hotels by a major chain, which is a huge error in traveling, in my opinion, especially in Ecuador. If you’ve checked the previous two posts, READ HERE  and READ THIS HERE, you’ll see I like staying at historic haciendas. This piece is about my selection to stay in Hacienda Leito, a place of a lot of historic conflict. HERE is where I initially found these things.

Well south of Quito, towards the part where you can trip and end up in the Amazon, is the foothill of Los Llanganates National Park. It is a beautiful region of the country, for sure, always beautiful greenery in every direction you look, and crazy rolling hills. The ride there alone is worth the trip towards the middle of the country, trust me, but because of its location, almost in the center of current day Ecuador, Hacienda Leito falls in a very interesting location, that has made it in the center of a lot of DRAMA, historically. Since the early 17th century, the Jesuits were heavily influencing the area where Hacienda Leito is, until they were booted from all of South America in 1767, by the Spaniards, at the command of King Carlos III .

The Jesuits were gaining political power, were often polarizing depending on the colonial power are operated in, and found themselves pissing off Spain, and siding with Spain’s enemies, or pissing of Portugal for opposition to oppression and enslavement of Indigenous people in South America, as depicted in the Robert De Niro movie, The Mission. The Mission pointed out how the Jesuits were trying to “civilize” the Indigenous populations, to show that they are “human” to the Catholic colonial powers of Portugal, and this happened in Ecuador too. The colonial powers wanted no piece of the equality talk, they were there with a mission to exploit Ecuador, and rob it of its resources. The Jesuits were trying to protect the Indigenous people from what people argue was not slavery, but was a “deal” with the local Indigenous people, with the Spanish Crown. I can promise you that more than 90% of today’s Latinos/Hispanics, know NOTHING of Encomienda and Repartimiento. It is something suppressed in the history of many countries in Latin America. The Jesuits had it right, it was slavery and they considered it immoral.

After running the Jesuits out of country, the Spaniards (Royal Audiencia established in Quito) were free to exploit the locals and all their resources, which was the mandate by the Spanish Crown. These were supposed to be CATHOLICS, but they had no respect for locals Creoles or the Indigenous, brown people. The Spaniards sent their Conquistador Captains (Encomenderos) to go enslave Indigenous people (Encomienda and Repartimiento), to mine for gold and riches, which is why casting out the Jesuits was important, because the Spaniards stole that Jesuit area, leading to control over Hacienda Leito. Why was the hacienda important to them?

The Spaniards were after the rumors/legends of huge caches of GOLD that was supposedly held by the Incas. Hacienda Leito is at the entry point to the rumors of where the gold was, the Tungurahua Province, leading into the mountains and canopy of the Amazon, Los Llanganates. The Spaniards felt the key to that was to take down the Incas, so they captured the Inca king, Atahualpa, and ransomed him for the rumored gold. Atahualpa died while the gold was being transported, so the Incas supposedly hid the gold somewhere between Hacienda Leito and Los Llanganates, which was impossible to navigate, back through then. That made the Spaniards send hundreds of treasure hunter parties throughout the years, and they never recovered any gold whatsoever, after all that exploitation. Anything found was to go back to the Spanish Crown, but slave labor was still used for other production from the land.

The Spaniards used the area to perform their version of slavery/land lordship, until a change of faith in the 20th century, becoming the largest hacienda in the country, as it was a pig/cattle farm, and main producer of wheat, wood, potatoes, etc. Hacienda Leito turned into a powerhouse productive force and shed its negative past, due to the newer owner, Mr. Marco Antonio Restrepo, in the 20th century, who was a visionary, of the times. He was the king of wood, which explains the beauty of woodwork and various woodwork tools scattered about. However, the farming and landownership system at Hacienda Leito saw no empowerment of the locals during any of that time, who worked all day and received little benefits under terrible work conditions, and they definitely opposed how ownership of the hacienda land never got to passed to anyone Indigenous.

So many uprisings happened in the early 20th century at Hacienda Leito itself. At this point, Ecuador has already been liberated from Spain, this was an Ecuadorian government now, yet Indigenous people still had no stake in the haciendas and the lands there. They worked at Hacienda Leito for a contracted number of days per week, and had to pay rent to live there. There was a protest at Hacienda Leito and that uprising resulted in 70 army men coming and slaughtering almost every Indigenous person the army could find, at Hacienda Leito, in 1923. They killed 100 Indigenous people for protesting unsavory work conditions. They only wanted a fair shake in wages and a right to the land that was stolen from them originally in the first place.

Why these haciendas are important is because many people are ignorant to the fact that there was a form of slavery that existing in all of Latin America, prior to enslavement of Africans, and people don’t realize the Ecuador was a part of that too, not just Colombia, Venezuela, Mexico or Peru. The Leito Massacre is not lost on the locals, but the anti-Colonial sentiments apparently ceased and when the hacienda officially stopped by he time the hacienda was converted into the hotel that you see today. That could have gone a completely different direction, and like Venezuela, the local could have been lead by someone who would kill all the hacienda owners, and given it to the locals and former slaves. That is what Jose Tomas Boves did, in Venezuela. He was a psychotic Spaniard thief who betrayed Spain, tricked slaves and locals to fight for him, defeated Simon Bolivar, banishing him from the land, then betrayed all his soldiers and people because he didn’t make them FREE, as the switch back to being Pro-Spain. Those kinds of raids did happen, and the army was sent to ensure that those kinds of revolts did NOT happen with workers who lived and worked there. I like that the rooms there are the original rooms that workers stayed in, in the early days of the controversy, complete with fire place and beautiful views of the land and mountains when you go outside. I like to go in December, this way I can use the fireplaces and also the air is so crisp and clear, and perfect for low traffic to tourist traps south of this location, such as Baños, or Ambato to the west. Very festive and it’s mostly locals all around, which is a beautiful scene.

The lands have been tamed since the early days but I could see how the area could be difficult to navigate, centuries ago. I couldn’t see the Tungurahua volcano any day that I was up there in the hacienda because when those clouds come in, they overtake the WHOLE AREA, and very quickly too. You look out over miles and miles of beautiful green land… and just wonder, how would one have reacted in those times of conflict, as an Indigenous person? How many souls have been lost at the hands of the Spaniards seeking a lifeless, shiny metal? I saw for hours just lost in thought and wondered, why was the fate of this hacienda so different from the other two that I visited? This one had the worst history, for locals, but represented a boom in capitalism, which is what is it hailed for today, in the tourism literature.