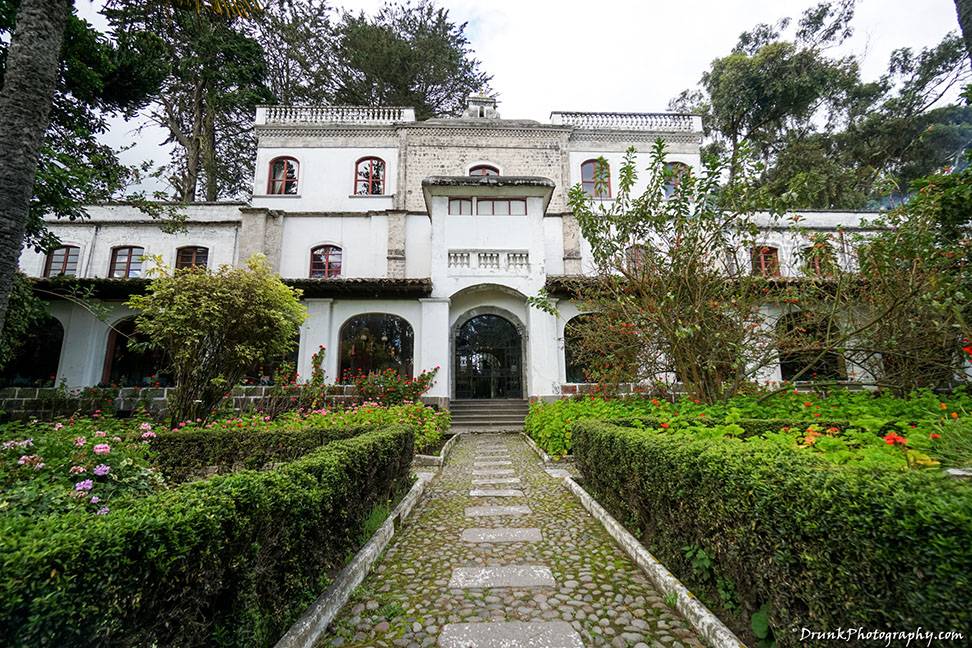 I have many friends who go down to Ecuador and then do the typical touristy nonsense, hit all the typical spots in Quito or Guayaquil, but never bother to venture out to some of the more gorgeous locations spread all throughout the country. Many of the people cite that they don’t go far outside of the cities because “there are no hotels out there” or “it’s boring out there”, therefore, they didn’t bother to get around to those areas. The problem was that were looking for traditional hotels by a major chain, which is a huge error in traveling, in my opinion, especially in Ecuador. One needs to think outside of the box, and that’s where haciendas come in! And trust me, this IS a thing! I checked La Cienega. Here is where I initially found these things. Also, make no mistake about it, haciendas were more than just “estates”, “ranches” or “farms”, when they were created throughout Latin America. They were similar to Plantations, in the USA, complete with slavery of Africans and paid local workers- just not as brutal as the form that the Whites from England/Ireland/Scottland/US performed. Peep BOLIVAR, on Netflix for an idea. Even Simon Bolivar himself had and kept slaves. His wife’s (Maria Teresa) dying wish was for him to fix the state of slavery, after she saw how terrible it was where/how slaves were being held, and how sick they were, which ultimately lead to her own death by being exposed to malaria and yellow fever. Haciendas were owned by the rich, by Spanish officials and even assigned soldiers.

What you can do, in Ecuador, which is why I love going there so much, is stay at historic locations, such as in haciendas that were created between the 16th to 18th centuries!  Yes, you read that correctly, there are haciendas that have existed since the 16th century, in Ecuador, and they have turned the grounds into places for you to stay, and are registered as hotels. What I love about it is that the looks are very old fashion and rustic, in the places that I like to stay, which is my favorite kind of scene when it fits the surroundings. I like these places because they are way away from the cities, and way away from the crowds of people. They have a very laid-back feel, which many people surprisingly hate, and therefore must have a fast-paced vacation, complete with beach and night club. I just like to chill and get some clear air while I sleep half the day. The haciendas are on private land and you can look out over beautiful horizons, most times, sometimes you can see some of the famous volcanos, on a good day. Haciendas mostly have a negative origin, when established by Europeans, such as the Spaniards and Portuguese.

Haciendas popped up after Cristobal Colon (aka Christopher Columbus), a drunkard sea captain, landed in the “new world”, in the tail end of the 15th century of present day Latin America, when he was supposed to end up in India – EPIC FAIL!!! The Spaniards arrived in an era we know today as the “Early Modern Period“, resulting in genocide of Indigenous beings who inhabited the Americas before the Europeans came. Haciendas had SLAVES, there is no mistaking that, despite what countries might want to say. Africans were absolutely made slaves, they were not paid workers! They had called the owner of the properties, and their offspring, “MASTER”, they were sold and traded, they were SLAVES. Yes, they tried to escape, where re-captured and killed, similar to USA, in that regard. For instance, Colombia’s first town where runaway slaves got to, was named “Palenque“. Many Latin Americans countries try to lie about this, fact, and outright deny the existence of their African descendants in current day Latin America, like Colombia did, despite taking in more than 1 million African slaves, in Cartegena’s ports. There is no mystery why that is the African descendant area of Colombia. So, if any country or historian tells you otherwise, they’re part of the nonsense that Latin America does where it tries to erase it’s past of slavery. Colombia is very well known for this, as they purposely unreported the number of African descendants in multiple censuses, in the past. It’s not secret, they were the first to be attacked when labor and wars for independence arrived in each country in Latin America. So, the fact that some of these are still standing, are miracles of their own. Each comes with its own story.

This hacienda is named “Hacienda La Cienega”. Its first country house was built in 1580, and the hacienda was known to house famous researchers who would study Ecuador’s volcanic activities, in 1802. Hacienda La Cienega is one of the oldest in Ecuador. The area of Latacunda, the Andes mountains, which is where the hacienda is located, was completely flattened by earthquakes in the late 17th centuries, as Ecuador suffered many, repeated eruptions from the Cotopaxi volcano, which the hacienda is positioned at the base of. This area scared many people, because many had died due to those eruptions, and despite all of the chaos, and all of the neighboring houses and churches being destroyed, in the neighboring area, Hacienda La Cienega was miraculously not destroyed at all! From a spiritual perspective, it is a truly blessed location. It is also fitting that Hacienda La Cienega has its own church on the lands, and you can go into it if you stay there, as freely as you wish. It was visited by Popes, when they came to Ecuador.

Hacienda La Ciénega is located 1 hour south of Quito, which is part of its history. Prominent people associated with the local government that was established in Quito, during the 17th century, had close ties with the Spaniard owners of Hacienda La Cienega and often stayed there throughout the centuries. Quito was the center of operations for Spain, governed by what was called the Real Audiencia of Quito, a Spaniard authority that had jurisdiction in Ecuador, Peru, Colombia and Brasil. In text books, you might have also heard of this referred as the “residencia de Quito” or “el Reino de Quito”, since 1563. Well, in Quito, 1809, and after 300 years after being colonized, the locals (aka Creoles) wanted independence from Spain, so they rebelled in Quito.

This was the first EVER uprising in all of Latin America, against Spain, and what made it very interesting was educated people ALSO wanted independence from Spain. Indigenous people used to be controlled under a different form of “slavery”, where locals would work the land/minds under a Spaniard overseer (an Encomendero), which was called “Encomienda”.  The land where the hacienda sits was first established by an Encomendero. Hacienda La Cienega was a sheep farming operation primarily, at the time.

Encomienda allowed the Spaniard, or Conquistador, to get a land grab grant to take over huge area of land that belonged to the real Indigenous people of “Ecuador”, and to also take a good number of Indigenous people too, as slaves to go mine for gold or farm land. This was done because Spain wanted to recover from losses to wars with Jews and Muslims, back in Spain. The land that makes up the current La Ciénega is on land that was once used in Encomienda, which is why the country house dates back to 1580 and is considered a protected monument.

This disgusting practice of Encomienda pre-dates the next form of slavery, involving the theft of Africans from African, whom were enslaved and brought all around the world, including to the Americas, known as the Trans-Atlantic Slave Trade, but also came AFTER the failed attempt by Spaniards to forcefully enslave the Indigenous populations in Latin America/Philippines, “Repartimiento” . Repartimiento was banned and reapplied between 17th and 18th centuries, so some people I told about the haciendas were thinking that haciendas are “racist”, as one person said to me, because they’re not understanding why the haciendas still stand today, and were not burned down or re-taken by Indigenous people of Ecuador. Well, Hacienda La Cienega is a prime example of how haciendas survived the revolts and eventual war for Independence from Spain, 1820 1822. The Indigenous populations would have taken the hacienda land back if they did not approve, after kicking Spain out, normally. Hacienda La Cienega has a different history.

La Cienega : Sanctuary for the Exiled Heroes of the War

But that is NOT the full story of the land, the tradition of the current hacienda comes not from the original story, but from the changing of the guard. One of the original owners of Hacienda La Cienega, José Javier de Ascásubi, was an attorney with the royal district of Quito, but joined in the Independence movement and was fined an exiled to the hacienda, after previously being in with the Quito government. After being exiled, his wife grew ill and the Spanish authorities would not grant him right to see her, and she died soon after. He combined with another hero of the 1809 uprising (Juan Salinas), who originally got him connected with the Quito government, to take over the hacienda that is standing there today.

So, the heroes of this 1809 uprising are honored by this hacienda. The hacienda was also a refuge for the extended families after the Spaniards confiscated their lands from them for opposing Spaniard rule. So, this hacienda’s history is based on two heroes of the resistance, who were already well off, educated, employed, working for the government, and benefited from Spain’s rule, yet decided to ban with the other Creoles to kick the Spaniard OUT of Ecuador. This, mind you, was more than a decade PRIOR to the emergence of Simon Bolivar! This is why Hacienda La Cienega has earned its place in Ecuador’s history.