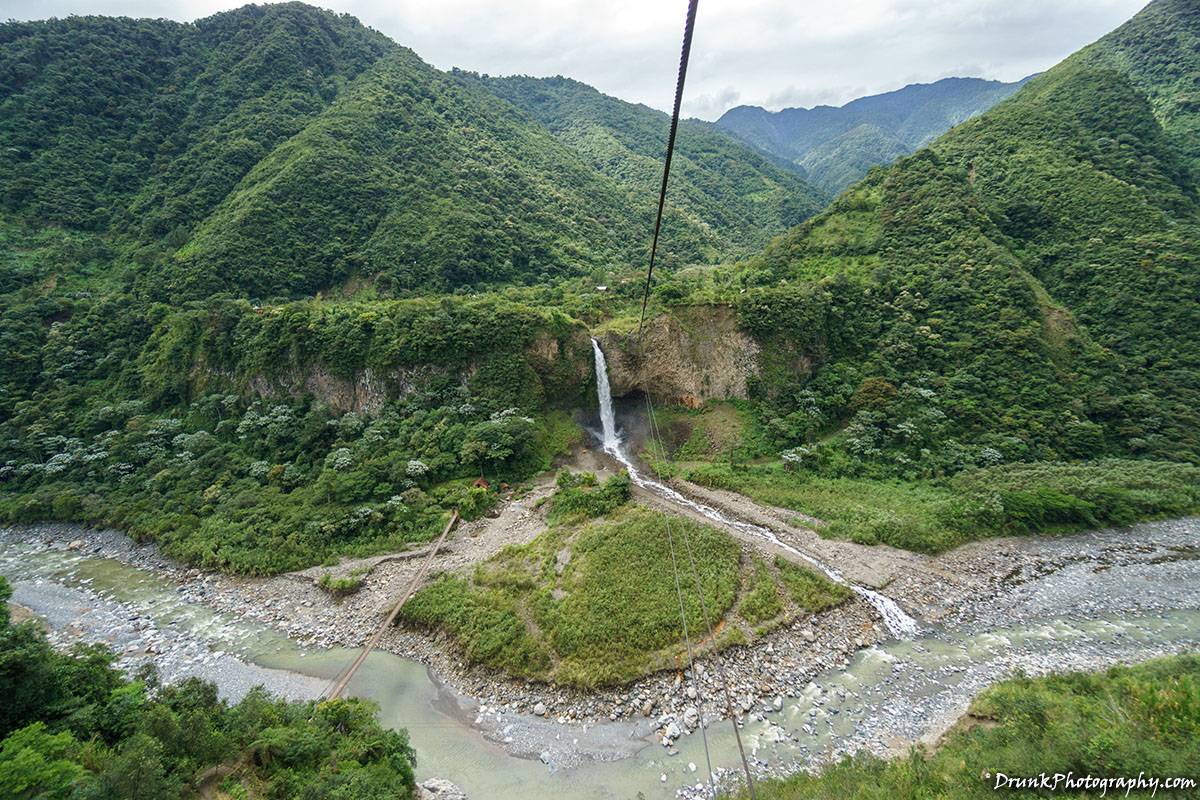 Ecuador is a beautiful place to experiment with getting out of the normal lazy habits of your comfort zone, if you’re someone from a modern-day city, living your average, boring life. There are so many cool things activities to do there, every time friends come back, they tell me about something NEW that they did. I get hyped up and get a direct flight out there! There are a lot of things to do involving nature, becoming 1 with nature, exploration in jungles, in mountains, in rural locations. You can be in a city 1 minute, and then in the Amazon Jungle the next minute. I like going to hike alongside nature they have there. While on the way to the beautiful town of Baños, Ecuador, to do a quick hike, and I heard intense screaming. It wasn’t screaming like someone screaming for a concert or someone crying-screaming like someone would be doing if there were in agony, it was screaming of a crowd and I thought someone fell off of a cliff or something. The collective gasp-scream was coming from the side of the road, everyone was focused on that and the small crowd that formed, but the screaming didn’t sound like it was coming from the crowd we could see. We hop out, walk towards the crowd, and then see that it’s a tarabita (a cable-car) station, but there was no cable-car in the station, and the sound seemingly disappeared out of nowhere.

I looked around, looking for the scene of someone’s brains splattered on the street, or over the ledge, or to see someone mauled by a wild animal or something, I didn’t see what the screaming was over. “Morons!” I thought. I look across the scene and I saw 2 waterfalls (Manto de la Novia) coming from the mountains across, and it looked like the cables for this tarabita disappeared into the mountain, right above the waterfall. I see people debating whether or not to ride, and many are getting off of the line at the tarabita station- great for me! Then out of nowhere, I can see there was a tarabita that had left the station and was now returning super quick. Ok, I realized that the screaming, that I heard earlier, had to be coming from these people who were on the tarabita that was appearing to return back to the station. I get on the line, get right in front of everyone, like the macho man I am, but then I look at the faces of all of the people, and they’re all pink in the face, gripping the sides of the tarabita. Some ladies were laugh-crying fanning their faces. I looked at them like the most punk-ass scared people ever, from a simple ride across the alley way, where the Rio Pastaza is located at? There is nothing to be scared of.

The tarabita in this location is a true tarabita, meaning it’s an actual basket that carries people back and forth (people who live there), but tourists like to ride it too. I’d hate to be local when people like myself come through to have fun on it, they have to wait forever if there is no space to transport them across. You can fit like maybe 10 people in it at a time. I walk into the tarabita like “HA! FIRST!” I coach a buddy on it too, and when he got on it, the car shifted a bit, a bit too much I thought. Then another 5 people got on, 2 of which were heavy people, and the basket shifted oddly again. We were ready to go, the operators closed the cage of the basket, that shifted us oddly too. I started to look around to get a glimpse of whatever the hell made up the suspension of this basket, to check what was holding all of us up, and all that was holding us up was this goddamn pencil-thin cable that is at most 2 inches thick, traversing the whole valley! Whoa! I look around everyone is holding on for dear life, and we have not even taken off yet. Before I could set up my position in the basket, to get ready to take some pics with my camera, my head snaps back and… WWWWWWWWWWWOOOOOOOOOOOOOOF

We immediately go flying across the valley at what felt like 100mph, on this goddamn pencil-thin wire, more than 500 feet above the ground floor of the valley, and I could hear all of the people screaming right in my ear. Lol No like, I let out a cry from my butt at that time, I was caught off guard and had to rush to a pole on the flying basket, my camera is banging around the basket and I had to quickly put the pole in a form of a choke hold, so I could fasten myself in to be able to take some pics. This damn thing was flying down into the valley, using all gravity only, and all I could think was “what if we were to drop?” I look down to see this Rio Pastaza and there is no river! It’s all dried up due to low tide time, it’s just hard rock and dirt, I couldn’t see it from up top at the station before I took off, and now I see that if we did fall, we’re definitely done. This speed and this scene, a gravity-drop, this was hitting people hard! The wind blew a guy’s hat off into the gorge, that’s how hard the wind came. Man, that was beautiful, my heart was racing, it felt damn good. The cable-car is pretty different from doing a solo flying fox zip line, where it’s just you. The tarabita feels like that gasping feeling you have when a plane suddenly drops. When your feet are on a ground surface and you feel those drops, that’s a completely different thrill.

If you noticed that the pics look like they’re not from the same day or time, like how there are 2 waterfalls in 1 picture and there is 1 strong one there in some others, that’s because that is the same place I did this from, but it’s from multiple times I went by this location. The last time, the land was lusher, nice dark greens, the weather was good to this location. Every time I go to Baños, I stop through this place to get the thrill of this tarabita, I just can’t be in the area and NOT do it. Every time, I don’t tell people with me how scary that first drop is, and I just laugh my ass off as they also underestimate dropping in a basket to your pretend death. I’ve watched quite a few tough-guys turn beeyotch on this tarabita, that’s why I love it.