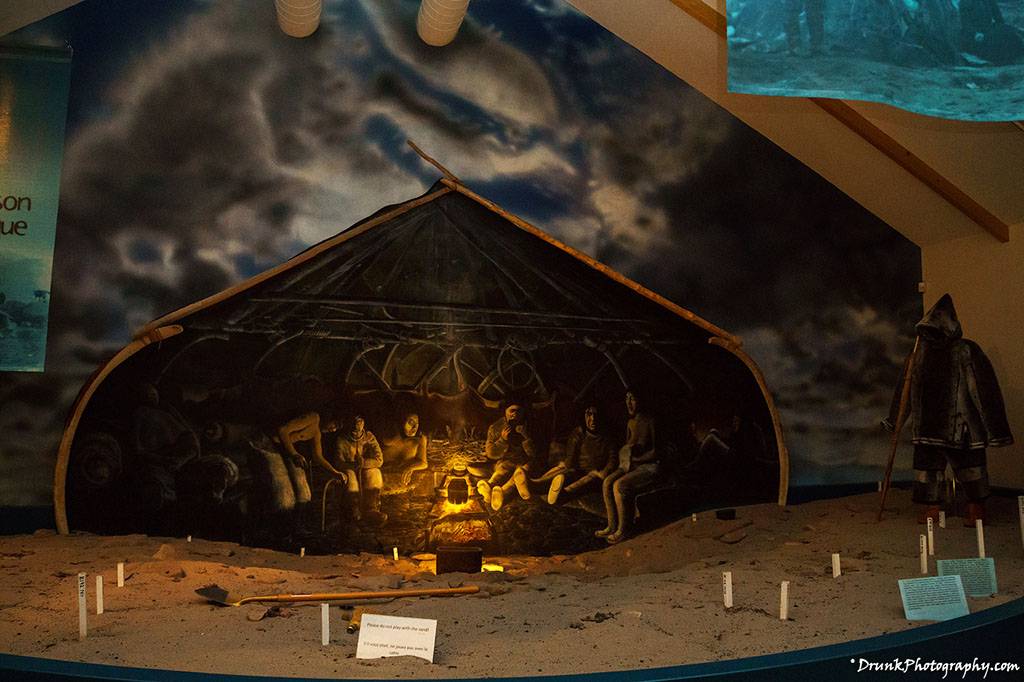 Port au Choix National Historic Site represents more than 6000 years of human history, in Port au Choix, Newfoundland and Labrador, Canada.  The earliest inhabitants to Newfoundland and Labrador date back as far as 10,000 to 8,000 years ago. Given this location, in the Northwest coast of Newfoundland, this made this place a great landing place for various types of ancient, travelers to the region.  Since it is located facing the Gulf of St. Lawrence, and the area pokes out into it, that makes it an attractive landing place for the various original people like the Dorset and Groswater Paleoeskimos (the ARCTIC dwellers from Greenland or Iceland), and the Maritime Archaic Indians.  The Gulf of St Lawrence offered great returns on expeditions, given the amount of sea-life that existed there, and there wasn’t any competition for it either. This lead to the coasts being heavily inhabited by these groups, more so than the interior of Newfoundland and Labrador, and there 3 were before the Europeans (The Vikings I wrote about here) made it to Newfoundland and Labrador.  An “Intermediate Indian” group arrived after the Maritime Archaic Indians, but they went to center of the island, not the coastline, after the Maritime Archaic Indians disappeared. There is no clear evidence that Intermediate Indians were them though.

This burial mound I went to was created about 7,500 years ago, which is located in L’anse Amour, not Port au Choix, as many think.  It had a child’s bones in it and is the oldest funeral mound found in North America. Given that timeline, that makes the grave of Martime Archaic Indian origin.

The Dorset however, are very well documented. What I learned was that the Dorset were experts in seal hunting and harvesting, by necessity especially. They could make just about anything you could think of using seal products. Clothing, things to build houses and of course food, were the 3 major areas for seal products.  The climate, at the time, was completely arctic, so clothes out of seal parts were highly important to the economies and survival of the people.  The Dorset were from Arctic conditions so they were well versed in navigation and hunting in these conditions. This land is almost completely flat, and back then meant it was all just ice all around.  Dorset could see the seals movement everywhere, and seals contrast heavily against the ice flow. So many seals were killed that the oils from their killings are still found in the soil, which scientists said is still greasy from the number of killings.  Even today the local cultures still continue with hunting and products being made of seal. Don’t try to bring ANY of that back in the USA though, you will be arrested.

Products made from seal as the originals used to make

I wondered how the artifacts found were so well preserved and it turns out that this whole area is flooded with limestone, the coastal bedrock is high in alkaline, and that helped preserve things composed of ivory, bones, stones, etc. The first finds were totally by accident, and by local people, not archaeologists. This made Port au Choix the deepest and rich archaeological finds in all of North America. Many of the finds are Dorset culture, Recent Indian, dating back 2,000 years ago, and fossils.  Recent Indians are ones discovered in the 1990s, not related to the previous ones it seemed.   Each Indian culture died off 1 by 1, and was replaced by new inhabitants, starting with the Maritime Archaic Indians (coastal) being the original, the Groswater then Dorset Paeloeskimos (coastal) and the Recent Indians (inland). The Dorset Paleoeskimos died off completely 1,000 years ago, but they date back to 4,000 years ago, no relation to the previously Indians. About 2,000 years to 300 years ago 2 groups of these Recent Indians were found morphed into what we know as the Beothuk.  The Beothuk were in NL 300 years ago, why did they just disappear too?  There were advances in technology and at the time Europeans were there, so how can they completely disappear? Well, lack of willingness to integrate and procreate with white people is why, after centuries of habits they only subscribed to.  They knew they had inferior land because they were NOT on the coasts so couldn’t take advantage of the sea-life, they were in the Interior of NL, and that’s barren.  The NL Government was already established by then and made attempts to extend welcome, but the Beothuk refused. To be really real, this group would rather die than mix with European descendants and die they did. The last known Beothuk died in 1829.