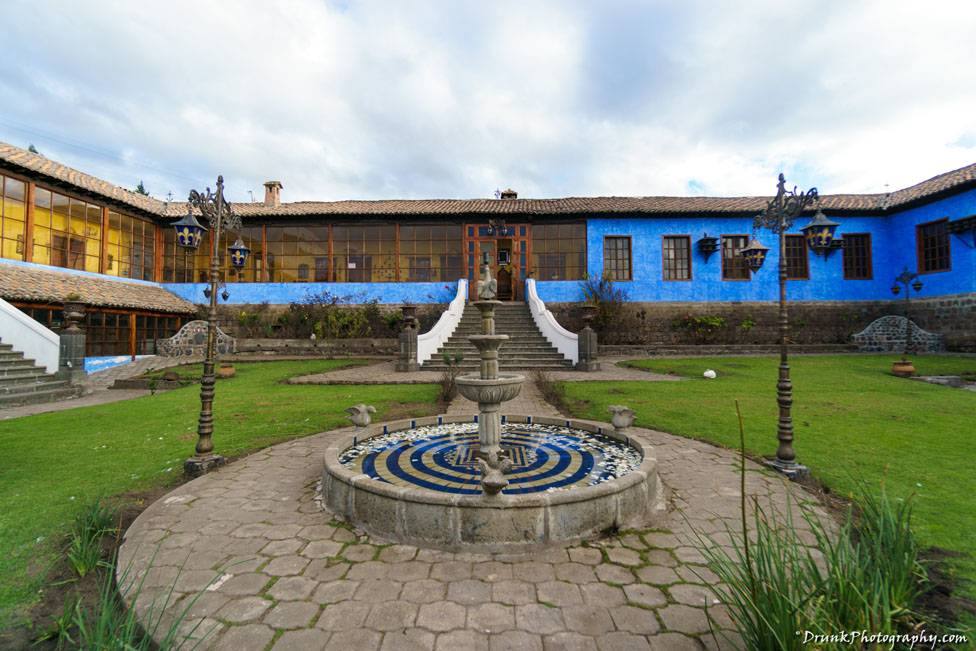 I have many friends who go down to Ecuador and then do the typical touristy nonsense, hit all the typical spots in Quito or Guayaquil, but never bother to venture out to some of the more gorgeous locations spread all throughout the country. Many of the people cite that they don’t go far outside of the cities because “there are no hotels out there” or “it’s boring out there”, therefore, they didn’t bother to get around to those areas. The problem was that were looking for traditional hotels by a major chain, which is a huge error in traveling, in my opinion, especially in Ecuador. One needs to think outside of the box, and that’s where haciendas come in! If you fly into Quito, in the North of Ecuador, and want to get in on this experience quickly, up to 1 hour south is Hacienda La Cienega, which you can read here in Hacienda Hopping Part 1. Hacienda Chuquipogio aka Hostería La Andaluza, is one I’d like for you to check out if you find yourself in the south of the country of Ecuador. Here is where I initially found these things.

You fly into Guayaquil and head North East towards the snowcapped volcano known as Chimborazo, where at the foot of the mountain, you’ll eventually get to a town called Riobamba, in the Andes mountains area known as Central Sierra. The hacienda is considered part of the cultural heritage site in Ecuador, as it is an historical landmark. The land that would become Hacienda Chuquipogio, an ultimately Hostería La Andaluza, was established in 1555, 16th century, and was giving to a conquistador, as part of the Encomienda pseudo-slave system that existed in Ecuador. The same system which allowed all conquistadors the right to seize a piece of land and then make the Indigenous people, whom he stole the land from, work to enrich the crown, by way of an approved land grant. That’s how ALL haciendas were created, you have to get the right to do it from the government (Spaniards), located out of Quito if what was known as “el Reino de Quito” aka the Royal Audiencia .

Back in the early days, the Royal Audiencia controlled many parts of Ecuador, Peru, Colombia and Brasil from Quito and all things had to flow through them, but only benefited Spaniards and rarely the Creoles, who were people who lived and were born in Ecuador, excluding the Indigenous people who were always on the land prior to any Spaniard every arriving. So, as most haciendas, the lands were owned originally by the oppressive conquistadors, but sometimes locals who were of importance to the crown.

The hotel itself was build in late 1700s but since the hacienda’s creation, it always was owned by a Captain of the Spanish Crown or someone from the Spanish Crown, initially. The land was a place that Simon Bolivar came to stay at Hacienda Chuquipoguio in route to his conquests. There is a dedication to him in Hostería La Andaluza. Records kept about the people who came to stay at Hacienda Chuquipoguio proved that it was also used as a location where multiple activists met to plot revolts when revolutions against the government in Quito formed after their creation of the 1843 constitution and opposition to General Juan José Flores. So, the arrival of Simon Bolivar is promoted heavily because clearly, he is the hero of the revolution, but it also helps to put distance between the history of Conquistador oppression of the Indigenous populations and the progress that was made after Independence from Spain.

The other great thing about Hostería La Andaluza is to do what I did, which was take hikes to the mountains, and there are a great many places to walk around. Unfortunately, it was raining HARD when I was last there, yet still did the hikes, since I already paid for them, but it was MESSSSSY- yet fun. The first time I went hiking, after I got back to my hotel, and immediately crashed, some time at like 6pm, because I was completely out of breath, not being used to altitude yet. Still, I was completely surprised by the odd things I saw, on the way through the inn, as I went entered it from a direction I wasn’t familiar with, and saw all kinds of crazy things, on the walk trying to find where my room was.

I went to sleep, briefly, then woke up late night and couldn’t sleep anymore, so started going all around Hostería La Andaluza, being amazed from 1 stop to the next, in a seemingly endless display of museum like, artifacts and rustic scene that blew me away. I almost completely ignored all of the beautiful things that this place had to offer, because I was coming back too late and too tired to do anything. Hostería La Andaluza was my first attempt at staying in haciendas, and I really was weirded out, in a good way, by the rustic yet beautiful simplicity of this place. Something as simple as the bathroom, for some reason, amazed me, as it faced the sun almost all day and a gorgeous illumination lit up the room. What people don’t recognize is that the furniture looks so old because they really are all old! It’s old colonial furniture, which is while to have out in public, but it is real! The whole place is a museum.

There is also a location that you can find where there is a library. This is the library that Simon Bolivar studied in and planned strategy for the future of Ecuador. Every time I wanted alone time, I went right to the library because there was never anyone in that room, and it was really quiet, like a modern library, with some really interesting reads there.

If it’s pretty busy in Hostería La Andaluza, then you’ll have the option to have live entertainment with your meal. First, you can have a meal where the inn will bring you a bunch of raw meat and seafood, that you will be able to cook yourself. I know, most of you are lazy and you demand that someone else cook the food for you, but the interesting thing about this is you are handed flaming hot slabs of volcanic rock, likely from Chimborazo Volcano, nearby. The rock slab will melt your skin, that’s how hot it is, so, you throw you food on it, with season and let the rock cook the food, as you flip. THAT alone is worth the visit. And while you are eating, you have the option to take in a live music show, complete with flutes, bongos and guitars. I loved it so much because we used to have guys walking around midtown New York City who used to play the flutes and wore ponchos, back in the early 2000s. Luckily, they were selling their CD and I bought it. I still rock out to it, ever once in a while.

The most important part of the stay, of course, which I saved for last, is the room. I don’t like rooms that are all fancy-pantsy, like 99% of the 4 and 5 star hotels I stay in, when I’m working. When it is time to get cozy, I want a COZY room. Makes sense, no? I hate the updated gadget-filled rooms, I feel lonely in those rooms, especially because I always get my own room when I travel. These rooms in Hostería La Andaluza made me feel like I was Goldie Locks or something, in some room in a cabin built in the woods. Really old school theme is what people should go for here, this quaint look is my thing now. Since this was my first hacienda that I stayed in, it set the bar for me. I slept like a log that night after night, after I finally got around and saw the place in its entirety. I later figured out that I couldn’t sleep well, after coming back to Hostería La Andaluza each day, because my mind and body told me to go and explore the rest of the inn, which took me 3 days to finally get around the inn to find the things shown in the blog entry. Yes, I know, it’s just a “hotel” to some of you, but if you read this far, then this piece worked on you, and you know you should get down to look at this. Only me, and Europeans, thought all of this was interesting, so I can’t promise the effect of this place will work on you, but if you want a completely different experience, go to this place in the December/January months, and you will be able to have the experience with the fireplaces, and will be able to have the FULL experience, as I did.