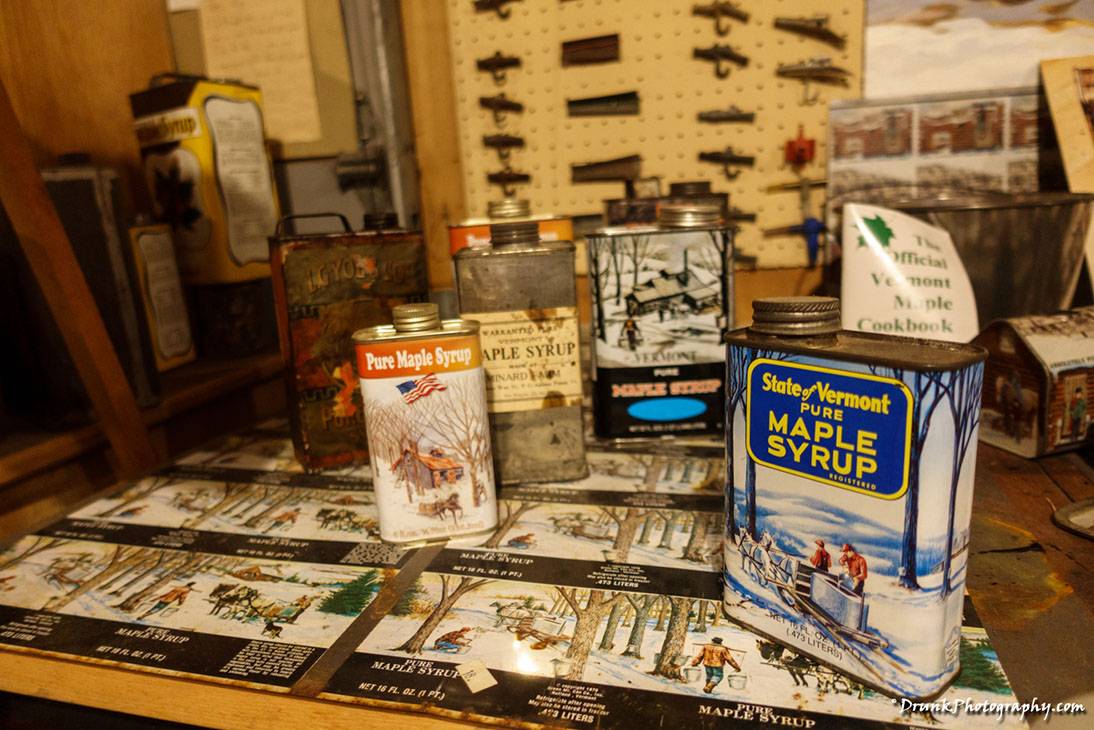 When I was younger, I spent a considerable amount of time bouncing around the North East of the USA, making base camp in, and neighboring the state of, Vermont. Previous to heading up further north/north-east of New York, my habits were geared towards big cities, not New England living, so that was a complete culture shock to me. I wasn’t used to all the trees, covered-bridges, people who said “hi” to you with no intentions of trying to get something from you, doors that were unlocked always, cold mornings/nights, frost on my grass many mornings, the silliest Winters ever, …and Maple Syrup products. I can honestly say that I built up an addiction to maple syrup products, as a youth, and had to be forced off of them by people who cared about me, for fear of becoming a Sinsibuckwud monster. I would want maple sugar in just about anything and everything I could get my hands on to eat. In retrospect, why I don’t have diabetes right now is a complete mystery to me, that’s how bad I was with it. Actually, the Master Cleanse Diet is all about eating nothing but Maple Syrup, so maybe that’s why I didn’t get diabetes. Even friends today laugh at me for going right at the maple syrup coffees (although they’re fake as hell out here in NY) offered by various chains. I just HAVE TO HAVE THEM, ALL OF THEM, but they’re only available during Fall. My people laugh at me about this addiction I’ve managed to hide until lately and will pass come December. Many people ask me why we have seasonal products, like Maple syrup coffees/donuts, well I’ll answer that and explain this 1 of my many strange behaviors, at the same time.

When I was in the upper North East, the problem was that Maple syrup products were everywhere, and infiltrated all aspects of life up there, especially syrup. I originally didn’t have a need for them, because I used to absolutely hate pancakes before I arrived in the area. I figured out early that I didn’t like that taste of the syrups that my family would buy. To add insult to injury, they would buy the most disgusting local supermarket brands, figuring that they were saving money, but it all just tasted like plastic mixed with sugar-water. Just horrible! When forced to eat those damn pancakes, I’d be the type of person to barely cover the pancakes with that syrup, very lightly doused. The pancakes were very good, they were also very THIN, and good thing because if they were thicker, I’d need a lot of that disgusting syrup. Yuk! Everyone else, ate the pancakes like they were God’s give to a frying pan. This became the point I absolutely hated pancakes, and that would continue for a decade and more- that was until I went further up north-east. Shortly after arriving in Massachusetts, the very next morning, the first thing that was put on my damn table, was a 2-pancake stacked mountain, very thick, right in front me. I was at the home of a family I was staying with, I couldn’t tell them that I didn’t want to eat that shit, I didn’t want to be disrespectful. They stared at me smiling deeply, almost as if they knew I hated these damn things, but that wasn’t the case, they were just overly proud of the pancakes that they made. My every move was watched by this couple, waiting for my response to these pancakes. I thought that the best thing to do would be to eat the pancakes without any syrup and almost got away with it until they called me out for being silly, and slid over a HUGE gallon jug of syrup. Ah, shit, my worst nightmare I thought, just the thought of syrup and I could feel a gallon of saliva suddenly flush my mouth and rush to the back of my throat, I felt nauseous and quickly drank some milk. They told me is was “100% pure Maple Syrup, not like that garbage you get from NYC”. That really peaked my curiosity, so I began to sample the syrup and – gooooooootttt ddyaaammmm that was some good syrup!!! I didn’t know what to think, actually I didn’t think, I flooded my stack of pancakes with this syrup to where the pancakes were so soggy. These guys just laughed their asses off at me, proud to feed someone who was eating like someone who had never eaten food before. I questioned about the difference in Syrup because I was all thrown off, and they gave me a whole history lesson on Maple syrup, which I couldn’t verify at the time, there was no Internet and no Encyclopedia Britannica anywhere to look this info up. Later I found out that they were only partially right because their story was that it was something New England prides itself if using because it was brought by the European settlers.

Ok, first, Maple syrup and maple sugar was NOT something that was brought to the New World by European settlers (a common misconception), it was a process that was long practiced by the Native Americans of the USA. Europeans had no idea about this stuff, previously. The most popular story of its discovery goes that a Native Chief threw his tomahawk into a tree and discovered the sap, which is CLEAR not the colored version you ultimately see. So, his wife thought that it was a new source of water, so she would then try that sap with meat she was cooking. It boiled and made a great new flavor and layer on the meat, and it was from then-on a success. This is where I got that name from “Sinsibuckwud”. Native Americans called Maple Syrup, “Sinsibuckwud“, or “sheesheegummavvis”. They would then cut into the tree, use a hollowed-out tree trunk to transport and ultimately heat it over dried brush/rocks, to make maple sugar clumps that would form. This was the main, if not the only major source of Energy for Native Americans during the brutal Winters of the North East. So, Maple Syrup had been cemented in lives of Natives, and European Settlers in the North East from then on, but it was mostly done in the FALL-WINTER, in preparation for the worst of the brutal Winters. Also, you need to have a temperature of about 40 degrees at time of extraction, to get sap to flow; however, the weather had to be below 32 degrees the night before you extract. They did extract sap in Spring, too, but that’s not when it was ultimately optimal for them, given that. So the best time in Spring would be going from Winter to Spring, not Spring to Summer. So, Maple Syrup goes hand and hand with Fall to Winter, and especially Fall Foliage time if you are from the North-East USA. This is where the seasonal association comes from, a pure necessity for Native Americans. Maple Syrup production was very important because, before the 1700s, sugar was a precious item, which made it too expensive for most, therefore it wasn’t a steady part of anyone’s diet. After tea and coffee became widely popular, in the 1800s, that’s when sugar consumption exploded. Native Americans would trade maple syrup with the fur traders and Settlers, so it was important to their economy.

Now, when the Europeans got involved, in 1750, many were masters of metal-work, so while they didn’t discover the maple syrup and process, they brought new tech to the maple syrup game and took the Native American knowledge to enhance the extraction and production process. They refined the Native collection techniques, first with better wood craftsmanship, then finally with better metal work to replace all wood used during cooking of the sap. Natives used wood and stone, and wood certainly didn’t last, so this was a huge game changer. Europeans made these metal spouts they would hammer into the trees, and then attach a metal bucket to the trees with covers over to keep debris out, leaving them to hang, and fill up very minimal waste. They would make many buckets like this and just swap them when they filled, and throw them into barrels in Ox carts, for better transportation across the lands. Natives had none of that, that what’s the Settlers brought to the maple game. This is the key turn in the making because the sap is 98% water, which means if you want 1 gallon of maple syrup, you need 40 gallons of sap! Storage of that much sap needed innovations in technology, which was can thank the Settlers for! They had metal pots to boil in, which was also more efficient, but note that Vermont is NOT close to the coast (imagine back then by horse), so most of the coastal places got white sugars from sugar cane, and to go all the way over there and get that would not be economical for the rest of New England. So, places like Vermont used maple sugar instead of cane sugar, it was completed more economical especially for farmers. In between making the crystals that form sugar, during the heating process, you have a phase where it’s syrup, which could be stored. So now they had 2 products from the sap. Working together, technique plus the technical, these Native Americans and Settlers made it possible for me to have my FIX, whenever I want!

It’s amazing to go back and remember the history of Maple Syrup because it’s being attacked by the fake-maple industries. Thanks to corn syrup being used in just about everything in the USA, companies started mass producing “fake-Maple Syrup” by using less and less actual maple syrup in their products.  Most of what you see in your supermarkets is fake, and they taste horrible, once you’ve tasted the real thing. Since many of the people in the USA don’t know ass from elbow, they don’t know what real Maple Syrup tastes like, because they’ve never had it in the pure form. As long as their fake products are overloaded with sugar, and turns their pancakes into huge mush-piles of soggy bread,

they’re happy. They’re also being overloaded with sugar and obesity due to the corn syrup, so people should make the switch back to Maple syrup.  Hell, have you ever had bacon or some apple-chicken sausage marinated in maple syrup? DYAAAAAAM SON! You’re missing out if you’re not, and I’m seeing more and more diners and even Duncan Donuts (fake syrup though), trying to emulate the breakfast of Northerners who use maple syrup on all kinds of cooking and baking items. If you are in the area and want to get some magic in ya bellies, they sell a bunch of products in the NEMM. It’s a healthy substitute to use maple syrup instead of sugar. I’ve made the switch, and you can too. Observe the many things you can do with maple syrup. Just don’t get as out of hand, like I currently am.  If I could, I’d have something the size of the picture to the right in my house, filled with maple syrup goodness. A great place to experience this rush, and get some quick knowledge in the brain, is to head to the New England Maple Museum (NEMM), in Pittsford, Vermont, USA. They have the largest museum (that I’ve seen anyway) of collections of tools, cans, buckets, barrels, etc from the old days of producing maple syrup products in Vermont. There are a few museums dedicated to telling the story of maple syrup in the region, but this will be the most entertaining of them all. You can also finish off the tour with some shopping for products they make at NEMM.