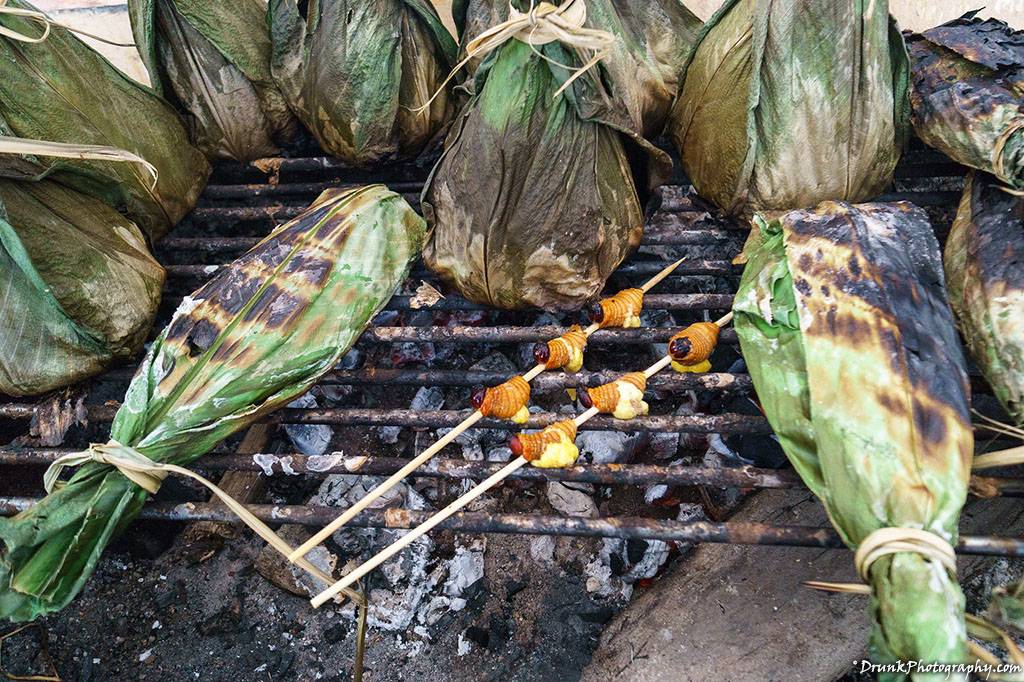 Look goddammit, do you want to have to sh!t in a place like this, with no other “civilized” alternative within 3 hours of non-stop-driving in any direction??? Yeah, that’s what I had to stare down for 30 minutes screaming to myself “Dooooo are you F@#$%king kidding me!? There has to be a better way!” Then you should probably read this post with an open mind towards Entomophagy!

Normally, when I’m out and about, taking photos, I sometimes lose the urge to eat big meals. I’m so interested in practicing photography that I forget that I need to eat too. Taking snacks with me has sometimes been a huge burden because one minute I have the taste for sugar or salt, but really what I need is a protein to hold my body down, since I’m likely doing a lot of walking/hiking. As of late, my secret weapon, for packing light when going on a photo hike, has been the practice of Entomophagy. Entomophagy is the practice of humans using bugs as food, but before you barf…. know that most of the world does it, in case you didn’t know. Hear me out:

Recently, I, got together with some peeps from upper New England, to go over Nature Photography. I learned some of the things I know about nature photography, from these guys, so I jumped at the opportunity to connect with them again. While shooting the sh!t, a guy pulled out what appeared to be a Nestle Crunch bar, and I saw the other guys go reach for pieces of it. Then they looked towards me, grinning devilishly, as one asked: “you want a Nestle Crunch?” You know that look people give you when they’re about to do something childish and sinister? Well, that’s the look they were giving me while offering this up to me, but I don’t really eat chocolate candy, so I declined. Still, I had to see what they were up to, so, I immediately went for the original packaging because I knew what a Nestle Crunch bar’s packaging looked like, and that did NOT look like it at all. I was sure I had seen this packaging before (I thought it a joke store), and I was sure that these guys were the ones with it when I saw it when we were out shooting once. I normally bring my own snacks with me for a hike, and normally I’d not ask for snacks from anyone, because they’re mostly health nuts. Now, I was suddenly curious, due to me sensing they were trying to trick me into eating something I shouldn’t be eating. I grab the box, and to my immediate horror, it was this:

I thought “this has to be Ex-Lax or something, or some kind of joke candy” but they were all happy just gnawing away on the candy like it was clouds from heaven, it couldn’t be a joke. They were laughing hysterically at the faces I made while trying to process what the hell this was. It was chocolate covered crickets. GROOOOOOOSSSSS!!!!! I launched into my traditional, joke-filled tirade, then they informed me that I had eaten this before, but didn’t complain at that time. They swore I did, I swore I did not, but then they told me that I took some candy from them when we were in the Canadian Rockies together. I immediately flashed back to that time, and I remembered eating some lightly-crunchy chocolate given to me, but I quickly denied that that was this. I quizzically took a few squares, realized that I was starting to enjoy the taste, then had to look at the box again because surely this was a joke being played on me. Well, it was not a joke, it was real, these were actually chocolate covered crickets, and they were extremely delicious and I definitely had them that time in Canada!!! These guys mentioned that these are huge in Maine. They do taste absolutely better than Nestle Crunch too, plus the added benefit of natural protein. This protein part was the real selling point to me, as I looked the package over again for its dietary information.

That’s 31 grams of protein, 7.5 grams of Fiber, 8.1G of Fat, 2.6 Saturated Fat, 1.8 grams Omega-3!!! From some damn crickets??? Mind you, these guys are JACKED, very lean and active dudes, so if it’s working for them, I surely had to see if this was going to work for me. I hate drinking whey or soy protein shakes, and can’t stand the artificial taste of most protein bars, but I knew they were on to something. Then I laughed because one of these guys is a survivalist and I saw him eat bugs before. I knew it was his idea the whole time, and it turns out it was. I took a few more treats from these guys and the next thing I knew, I realized that they were secretly trying to convert me into an Entomophagist  – until I got curved by a lady friend recently, … temporarily. lol So yeah, this is my new thing when I’m out shooting nature, but I swear I’m not eating any live bugs, OK Future Bae??!!!

I decided to try this out on some friends and coworkers, and funny enough only FEMALES were brave enough to try these out with me! Not one guy would try this from my city! None! At work or at home, only females would do it, big respect to females, although these ladies are all crazy like I am. I will tell you that I’ve been back in training, after eating these things, and I feel great! The benefits I’ve noticed:

If you want to check some of these out, and truly you should check out brands by Entovida at EntoMarket on Amazon.com, my favorite brand doing this.  The Cricket Crunch alternative to Nestle Crunch is here. When I questioned some of my buddies who are Latin fighters and who are total health freaks, about what forms of protein they take in, and a few of them mentioned that they used cricket protein too. They put me on THESE from Chapul, the company that hooked up with Mark Cuban on Shark Tank. Ask a Mexican if they ever had “CHAPULINES“, and if they say yes, then yes they done this!!! That’s what chapulines are a fool! I’ve had them, they also taste great and are tasty cricket protein. There are quite a few companies in this market, and I think it will continue to grow, despite the initial creep factor. At some point, humans will need to look for an alternative, sustainable sources of food energy, and these are great options. Since you’re getting healthy protein, in a form where you’re not overloading your stomach, you won’t have to sh!t in the worst possible scenarios, while you’re out having fun. This, I feel, is the most important part.

I mean with no side effect and no chemicals added, is that such a bad thing to have an alternative source of food fuel? I will say though, previously, I was might have not liked the idea of eating crickets, but damn if I wasn’t eating other odd things when with local cultures, abroad. And although hilarious, I don’t want to look like Karl Pilkington in “An Idiot Abroad”  when he went to China’s street market- and refused to eat so he ate potato chips lol. While watching that episode, I thought “yeah I would try to eat all of that”! When I was out and about the Amazon of South America (Ecuador specifically here), and I was doing some street photography when I came upon a bunch of people eating what I thought were chicken kabobs. I was starving so I went to get in on that action, and then noticed those were not chicken at all, the were the fattest WORM/BEETLE looking things, but the locals were eating them like they were the most delicious things around. I turn to my guide and he tells me that it was a very important source of energy for many of the indigenous people in the Amazon, historically, and it carried in some pockets of the country, especially those from Quechua roots. The word for them is Chontacuro, we know them as GRUBS. Seriously, this is a big thing in Ecuador. In fact, 80% of edible bugs can be found in Mexico alone! Every time I find a new product in this space, it has some form of Spanish in the name of the company selling it, so even if the company is not Latin-owned, it’s still a nod to Latinos and Hispanics who do this practice as a way of life, which I can also respect. I saw it done on Man vs Wild too, so I’ve been itching to channel my inner-Bear-Grills, which might be a little too far for me, but still, the option is out there. They’d stick a skewer right through it, maybe some oil, maybe flavor it up a bit then right on the fire. 2 minutes later, you throw them down your mouth like poppers. They’re dripping with fat if you see them on the fire, but I downed those bad boys quickly, realized they tasted pretty cool, like a fried chicken actually. I had a second helping! Look, sometimes you want to practice street photography and you’ll have to mix it up with local folks, often finding yourself in a situation where you want to partake in local habits.

Yeah I know, I’m weird but they are damn good, all of them and you’ll see more and more people get into them, especially as Asian and Latin cultures continue to bring in these interesting things they’ve eaten for centuries before anyone in Western society ever thought about them. I also would like to think that I could finally ditch red-meat properly, not contribute to cows’ methane output problem, while not losing too much muscle and strength. The other thing is also very tired of being stuck way the hell away from the rest of civilization, while out trying to get some good pics in remote places, and then suddenly I have to take the world’s worst dump ever!!! Normally, I get like that when I am eating traditional snacks, or I had a meal that was more than I really wanted or needed, hours prior to going out. I’ve had this happen too many times and this option here is a great way to limit those having-to-go-sh!t-behind-a-tree moments. Do you want to sh!t on yourself, one day? NO!?  <- that was pretty much the conversation I had with myself, actually. lol Then you need to get with this! So, I think this is a good start. If I don’t make any more blogs, in 2018, then you will know that I have died from this. But yeah, Bug Life, Son!