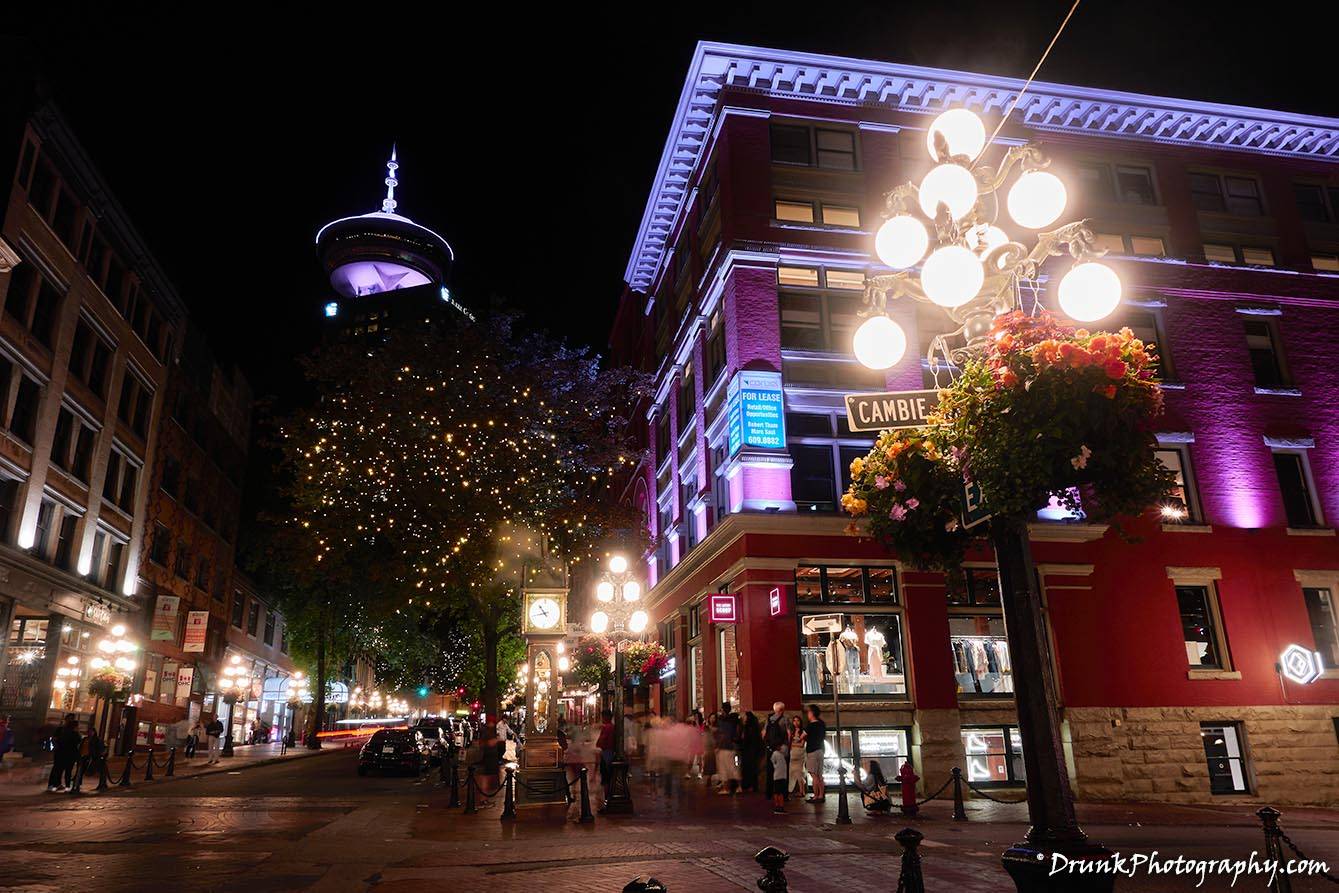 Chilling in Vancouver, Canada, after a whole day hiking, I couldn’t sleep and decided that I would to grab something to drink and go take a quick late-night stroll. I walked the streets for like 10 minutes and didn’t see even 1 soul, but then, suddenly, my stroll around town turned a little crack-headish in appearance of people, but beautiful architecturally, as I was now standing on cobblestones. I had stumbled on the area of Vancouver that is called Gastown.  Gastown is the original location of settlements in this area of Canada, getting its name from a local saloon owner named Gassy Jack Deighton. There was famous, huge Vancouver Great Fire that ravaged the area, back in 1886, wiping out the whole town in 45 minutes flat! The towns people has to start over and rebuild everything from scratch. The people decided to begin to expand itself out to the west, and called the new westward expansion by the name of Vancouver, and considered Gastown the “old Vancouver”.  Vancouver was thriving, while the “old Vancouver” became a run-down ghetto over time, and many people from Vancouver wanted to wipe Gastown out completely, and the mayor’s office wanted to build a highway through Gastown, which brought about big protests that stuffed that idea. There was historic value there in Gastown, so the town had an opportunity to now place value on its town, which happened by preserving/revamping the cobblestone streets and Victorian era look and feel, starting in 1971.

So, since it took so long to consider Gastown a historic district, that means some of what is there also is not as OLD as one might think, most notably, the Gastown Steam Clock. If you go to Gastown, the most important thing to see is that Gastown Steam Clock, which is sitting just east of the Vancouver Lookout tower. That Gastown Steam Clock is not something from the 1800s, as many people incorrectly think, considering that it’s a steam clock. I took an upclose look and knew it couldn’t be more than 100+ years old. People connect the idea of steam power to being something outdated, but 2 guys, Raymond Saunders and Doug Smith, created it back in 1977 as part of the effort to revamp Gastown. When they made it, it was thought to be the 1st of its kind, in the whole world but it turns out UK had one 1st, which I would have thought so too. The clock was built over an existing steam vent, which they built over the vent that became a public problem for Gastown. The whole city has a series of heating steam pipes underground, and this area where the clock is currently, was a place that a all of the city’s homeless populations gravitated towards when it was cold, due to the area being so warm from that opened vent in the ground. So the clock has dual purpose, to be a tourist attraction to help revamp the town, but also to stop that homeless pile up issue due to the steam pipe. Many don’t know that, but that IS the hidden purpose for the commissioning of the clock.

Many people also don’t know that the town of Gastown has to pay for that Gastown Steam Clock, not in taxes but by raising money from shopkeepers and donors from the area, which cost them $58k. This means that the town will also maintain that clock due to the amount of tourism and money it helps bring the area! The creator of the clock was asked to build 6 more of these, all around the world, after countries found out about this steam clock in Vancouver and this is a new phenomenon to have a steam powered clock. The clock’s engine contains a set of small ball weights, connected to a series of gears and chains which causes a pendulum to move about and that is how the clock keeps turning the hands of the clock and keeps time up to date. It is surely a marvel and I say to make sure to get an up-close view of the gears turning when the whistles and steams are going off. Well you have to actually be able to get close enough to experience this, so there is a trick to this too.

Speaking of the clock’s favorite party trick, blowing steam out of the top, it turns out that the clock is not solely powered by steam. Yes, that vent that the homeless used to gather around this whole area to receive its warmth is still under this clock, but it has help. It is assumed that this clock is all stream powered by the vent underneath but there are electronics involved in the Gastown Steam Clock too. There had to be a way to produce 2 features of Gastown Steam Clock: channeling the steam works and making the clock whistle to a beat, on time. Yes, the clock whistles! It needs to shoot steam up out of the values and then the whistles are like one you find on an old school steamboat. When it hits the hour, the clock will belt out the Westminster Quarters tune! How cool is that! You just wait 15 minutes and the mini show will happen until the full hour. Definitely something to see!

I did mention that the area was a little crack-headish originally before they put the clock over the stream vent, especially at night time, and apparently there are still some a homeless or crackhead element there. They’re harmless though. I used them to clear the way for me to take the pictures that you see here, because people were too scared of the crack heads to stay around late enough to check the clock out. This was a great opportunity to get pics without the streets being overly crowded. So if you duplicate my effort, go out later in the night to get the best shots. Get that Vancouver Lookout Tower in the background in your shot too. As beautiful as the clock looks, my tip is to go see it at night time because it’s off the chain beautiful, which is why I centered this blog entry around the night view, which is astronomically better than the daytime view. In the daytime, you’ll be lucky if you can even get close enough to the clock, due to the amount of tourists crowding the area. I completely walked by this area and didn’t notice anything, originally, except for the huge crowds of people crowding around something. I payed no mind and kept it pushing. Then, to stumble upon it by accident, while being bored one night, is freaking awesome! So, I say, go out at night, when the suspicious people are out and people are scared to walk in that area, then you’ll have much less in the way of crowds to deal with. Then you can listen out for the special effects and have nobody in the way of your video or pictures when it lets off. I did 360 photos all of that out there and with minimal crowding of people, during peak visiting times!