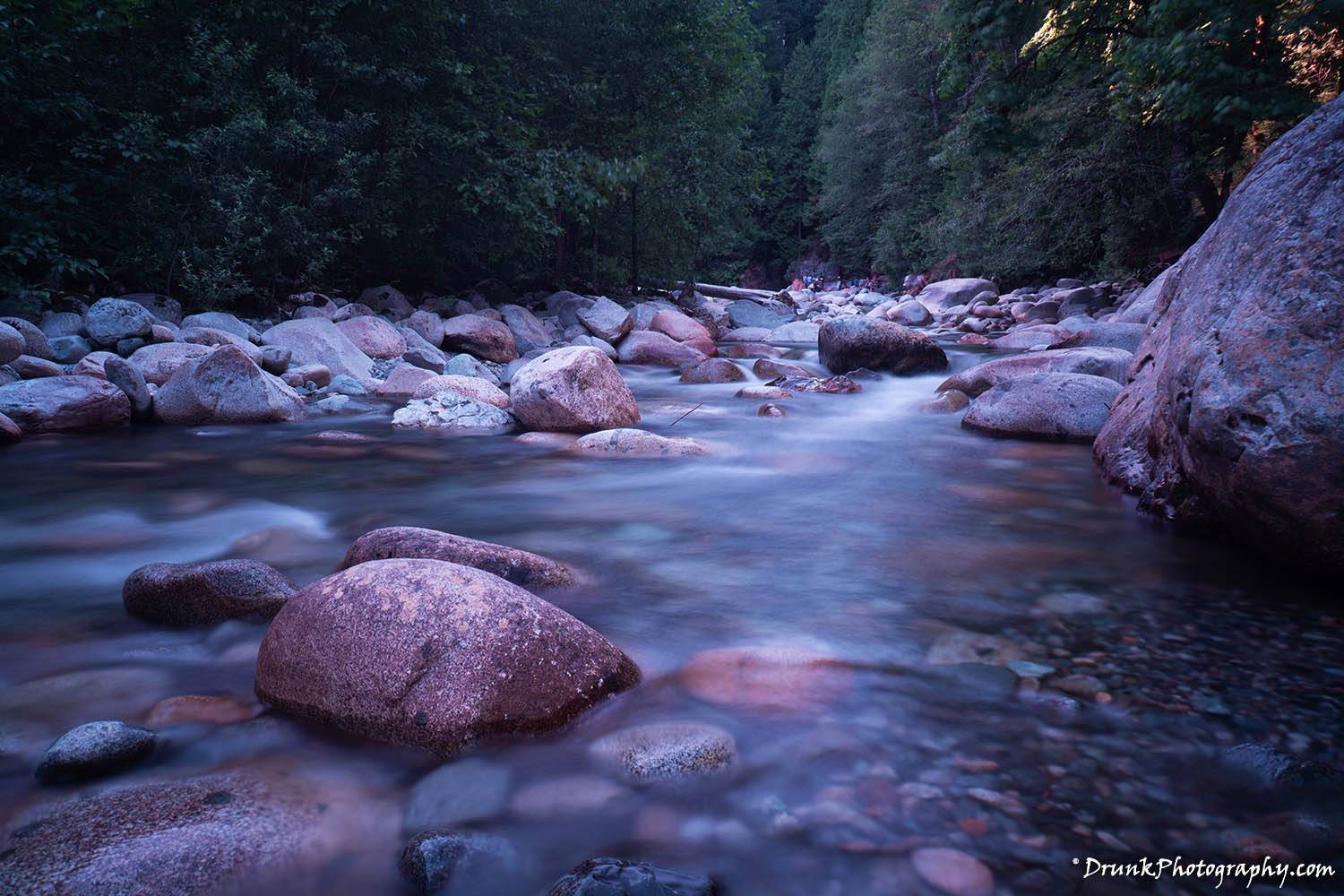 I often like to take trips just to get away from other people. Coming from a big city, it is easy to be ignored by others because there are so many people, but it’s not easy to ignore others. The latter is constantly a problem for me, living in NYC. It takes a certain kind of person to live there, and to be quite honest with you, I’m so done with NYC. Everyone is rushing but none of them are important, nor does anyone even have anything really important to do. They’re rushing fast in the streets, rushing on the trains, rushing rushing rushing… rushing fast while typing away blindly on their phones, almost getting themselves killed by blindly walking into traffic. Seriously, that is a big problem over here, one where it was going to be considered to make that illegal to Text-n-Walk. But what is this over-use of smartphones if not escapism from the real world and their real lives that they are clearly not happy with? I mean, really, they’re texting someone because they don’t feel like calling them, and if they’re calling/video-chatting with someone, it’s likely because they don’t want to go SEE them in person. It is escapism and living in your own private bubble. I often wonder if this is what’s behind so many people rushing everywhere, they’re just get away and escape something! That sounds like that might be true. Even if you go to a park in NYC, you can’t really get that quiet, alone time, it’s NYC! I think the lack of places to go decongest and decompress is killing people. So, before I set out for a week of really amazing, adrenaline filled activities in Canada, I wanted to get my own decongestion of the sorts going. I took my relaxation and meditation act on the road, to Lynn Canyon Park, and boy was that an awesome idea!

Let’s say you… pack up your things for a trip, albeit temporary, to get away from the madness and nonsense. You book a spot to crash, you organize transportation to your destination, all is good. The problem is, you get away and look up only to find that you have only transported yourself to a place that is completely overrun by tourists, and another city filled with people. 🤣🤦‍♂️🤦‍♂️Ok, so it’s a little less crowded than say a place like NYC, but you left NYC to “get away”, originally, and still need to accomplish that task. A place I like to get away to, oddly enough, is Vancouver, British Columbia, Canada. While not as crowded at NYC, the dynamics are completely different, as more people take advantage of the beauties of their outdoor surroundings. There isn’t so much of being absorbed on their phones with their faces pointed down to the streets, the people are friendly, say “HI” to you first. Wacky! Could you still get a nice getaway in a place where everyone goes to all the outdoor spots frequently? Well then we had to play a guessing game to find a spot NOT overpopulated by people who love to get away and see nature. Lynn Canyon Park!

Yes, Vancouver is a city, and it can get overrun with tourists too, but it’s not the NYC level of annoyance. It is also a great place that is away from the city madness, without having to go too far. Normally, when people want to get away from the city of Vancouver, they head 1 to 2 hours North, to Whistler and beyond. Well that’s where EVERYONE else is going, and I learned that the hard way too. So I switched everything up and went a different route. If everyone was headed to the North/west up the Sea to Sky highway, I figured, why not go North/east instead! Lynn Canyon Park is centered around a creek and a set of waterfalls, so they created hiking trails and bridges for one to navigate across the entire location. If viewing it from a map, it doesn’t seem so exciting but trust me it is, and Vancouver tries to promote it be more sexy, even creating routes to it with public transportation from the downtown area, making it accessible in half an hour! And as soon as I got there, I started seeing all of these funny/shocking warning signs about wearing bright colors, the presence of black bears, the history of the bridge printed on a garbage can, and the park’s biggest problem to date, CLIFF JUMPERS!? What the hell is going on at this place??? I came to chill, wtf is all this? 🤣 I thought maybe this place was a suicide watch place. I went there to be alone with my good thoughts, I hoped people weren’t taking their lives there.

There might not seem to be anything “sexy” about Lynn Canyon Park but I can tell you that it’s a less crowded, and quicker option to get to, than any of the other places I was planning on hitting in the subsequent days or trips to go some strong hiking. It’s a small park area that even with public transportation available, still wasn’t overcrowded with people in the most popular time for tourists coming in. I monitored, and the most people I saw at any given clip of time, in each area I was in, was 2, unless gathering to watch some thing terrible about to happen (I’ll explain later). So I knew that I had found the place to relax and take some photos of the peaceful surroundings. The first place I went to hang at was what they call the 30 Foot Pool, which I didn’t understand why it was named that until I almost slipped off the rocks and almost fell into it. Looking down, I saw a deep PIT in the water. There was the 30 Foot drop that the signs were referring! I couldn’t imagine why one isn’t allowed to jump into that as long as they can swim. I saw another pair of people swimming in what was the 30 Foot Pool and then they swam to another area of the park, which is accessible by the swimming the 30 Foot Pond.

Swim the 30 Foot Pond and you will arrive at the gem of the park. Lynn Canyon Park has this small waterfall that one can walk down to the creek and swim over to to get an up-close view of the small waterfall, which actually is 2 small waterfalls which combine. This is called the TWIN FALLS. You look down and it’s looks like you’ll find a pirate ship or something. Very clean looking water. If you go around the sunset time, there is a really nice mood to the lighting there, although at the top of the day there is too much sun and therefore not always so photographic because the sky will be blown out on days with heavy overcast. Going when the sun is on its way down will bring a peaceful, cool vibe. I sat by the stream and just took pics, watched some who looked like they were seeking the same relaxation or scaled-back time to just sit around and enjoy some nature, without anyone annoying you. I mostly saw people come in groups of 2s, as we did also, and they were there zoning out or something. People took a seat on some rocks and didn’t move for half and hour to an hour! It was beautiful to see. These scenes were popular back in the days of the popular Sci-fi show STARGATE, which used to film in Lynn Canyon.

Lynn Canyon Park also features a series of bridges, the Twin Falls Bridge and the Pipeline Bridge (a suspension type bridge) which you can view another waterfall towards the north side of the park. As I approached the trails to walk around past a “90 Foot Pool“, to make it back towards the exit, I noticed MANY more signs telling people NOT to jump into the water. Now, I didn’t know how to process that because I didn’t see any place someone would jump into the water, but then I had to remember that people WILL climb these fences that obstruct people from entering certain parts of the park because people are morons. That’s why people were going to the creek and swimming to get up close to the waterfall, they weren’t “jumping the fences” to do so. I looked around to see why there were suddenly so many don’t jump signs and they’re comical so I immediately realized this is a big problem at this park, sure enough, right in front of me comes some daredevils who hopped the fences to jump into the creek’s water from as high up as they possibly could. This brought a small crowd of onlookers who didn’t bother to walk down to the creek, didn’t bother to relax and reflex, unwind for the day.. noooo, they just wanted to see young kids chasing adrenaline and temporary fame while jumping from dangerously high perches on slippery rock cliffs, into cold water below, possibly cracking their skulls on the rocks, for entertainment! ARE YOU NOT ENTERTAINED???!! 🤦‍♂️I thought the crowd was there to see the waterfall, which they couldn’t see from that location, but nope, they were waiting to see death occur!

As I progressed through the park, there were more people jumping from even higher perches too, so if you can avoid that crowd, every over area is peaceful and not overpopulated. Supposedly, I was there on a busy day, it was only busy on the bridge and where the cliff jumpers were drawing crowds. This was like the things to do at this park, it quickly became clear! I will admin, I watched the kids jump, a few times, and I couldn’t look anymore for fear that I’d see someone’s brains splattered. Everyone was watching, even surveyors of the suspension bridge and what appeared to be rescue workers, likely on their way to make the kids stop, or maybe they were called in by some passersby. Even with the daredevils, Lynn Canyon Park was a nice quick, quiet getaway that was well worth the trip. Not a long hike, actually very short, and offers multiple places to just sit down and stop thinking! It’s a beautiful hike, the scenery will blow you away, but you still can get a good workout going as well. The park has an ecology center too. I can promise you it won’t be as busy as any location accessible via the Sea to Sky highway!