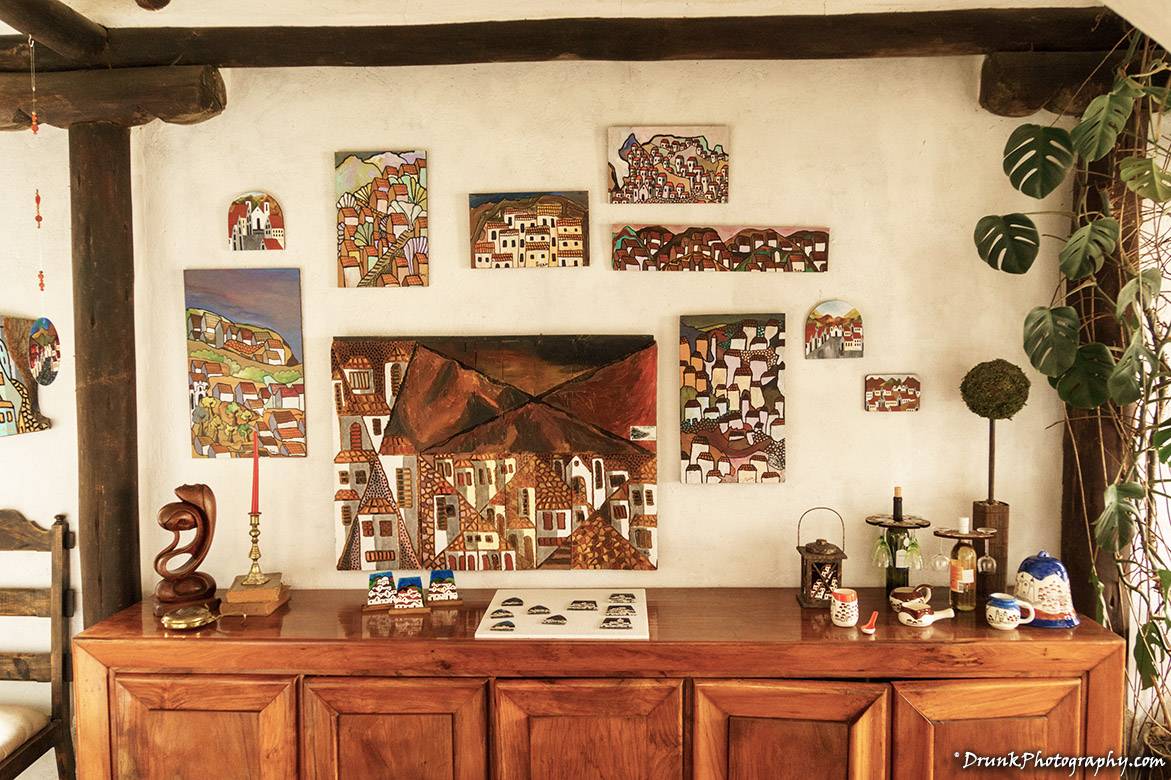 Too broke to buy art in San Miguel de Salcedo

I was out in Ecuador’s North East highlands, looking for art pieces. I had just had my apartment painted, back home, and I wanted to put some cool art pieces on my bare walls. As I got the North East, I stopped in at Otavalo, and apparently that was THE best place to find art, I was told. However, I had some really annoying experiences and exchanges while attempting to acquire some art pieces and also good, unique souvenirs while there. I saw too many things that were exactly the same thing as other art, a lot of things were not unique, people following me for 10 blocks were claiming to be the real artists of the pieces they were selling – which were all lies that were revealed when I asked about the materials they used to make the art pieces with but nobody knew that they had PRINTS on a canvas, not real paint. LOL One art seller damn near got in the damn truck with us try to stop us to buy printed copies of popular art pieces found all around town. I did manage to find a 2 canvas pieces, which I trick-bargained for, bought, rolled up and bounced before anyone knew my own hustle against the street vendors selling the pieces. You really need to know how to bargain when working with people in the streets, because they are not the real artists of what they’re selling, despite what they’re claiming, and ultimately, they need to make a sale to take back to whomever put them on the street to sell the fake pieces. If you’re in the situation, trust me, they’ll sell to you because the original prices they give are ridiculously inflated so that THEY can make a profit on top of what they were told to sell it for. I didn’t see the kind of unique art that I wanted to take home though, so, it was time to leave for Salcedo, next. I gave up on Otavalo.

We start going south and people started to voice that they didn’t get what they wanted, that they were not feeling the art there. They wanted some collectibles, as well, which they didn’t see anything worth their times. Every place we stopped, the options disappeared more and more. I noticed that the look of the towns were beginning to change more and more, as we traveled southward, away from Quito, so did the people and the language. Going further south and east, people’s dress started to change and their langue was changing to Quechua too, the language of the Indigenous peoples of the Andes (Incas). The other interesting thing which changed, which was more so what I was on the hunt for, was the art that was being sold by people in the streets.

By the time we got to Salcedo ( San Miguel de Salcedo if paying attention to an official map) in the Cotopaxi province, south of Quito, after the complaints of the party, our guide put threw us an Easter Egg, got us off the standard tourist paths, and announced that we now were going to get a chance to meet an actual artist who produces real art. I wanted some handicrafts though, and no one was selling anything along the way we went, I was assure I was going to get that and more. I was on my art kick, at that point, and needed something to take back as a good souvenir. I wasn’t trusting of anything so far, some of what I was being sold in other towns were clearly prints and not real, authentic art. So by the time we made it to San Miguel de Salcedo, we were promised that this artist had really good skills with a paint brush and also in making unique handicrafts. I was going to be given the chance to actually get an up close and personal look at local art by way of being able to go to an art gallery of a local artist named Aida Lopez. Now I was really excited to buy some art. * I have to admit, I forgot her full, and I asked another traveler what her name was, and this is the name she told me when I wrote this.

As we roll up, I see this very pretty Ecuadorian adobe style house, with a little extra flair going on there, at least on the outside, but when looking at that front of the house, interesting building. Many of the fake paintings that I saw in Otavalo contained these homes but I had yet actually see any of the homes in real life. So that was a very pleasant surprise to do so. In true artist fashion, there were paintings on the actual house itself, on its OUTSIDE, in the front, and stain glass on the windows all over the place. Now THAT was cool for a gallery, I thought, and as I walked into the place, I was overwhelmed with loads of great, creative art, in all directions. This is what I was missing, CREATIVE art, unique art, and there was plenty of it all around. There wasn’t even 1 inch of the walls, counters, desktops, tables, staircase, plants wrapping and lining ceilings and walls, etc that wasn’t covered in art of some form or fashion. It was incredible to see that everything in the place was a piece created by Aida, and/or her husband, whom unfortunately passed some time ago, but she continued the art in their names. I walked the gallery, for a few minutes, then I went to sit down on the couch,… and then it hit me suddenly “wait, why am I on a couch in an art gallery? Why is a couch here?” I sat there trying to inspect the couch like it was art, for about 5 minutes, then I looked at another couch across from it and was puzzled like a dummy. lol Ooooh I got it… duhh the gallery is actually a home, which turned out to be the home of Aida. Now that is how you know that she is a hardcore artist, she has literally immersed herself in her art!

I saw 2 things I wanted to buy for a lady friend of mine, back in the States. We had gone like 5 hours and there was nothing of note found, until we got to this point. Everyone loved all of the pieces, everyone studied each piece closely, made themselves comfy there, and now it was time to buy something after all the hype we made about art we didn’t like in earlier towns. I pointed to 1 piece, and inquired about the price, then another and another… and I realized, the more Aida read off the prices of the art to me… psssst the more I realized just how much I actually DIDN’T like that lady friend, back in the States, as much as I originally thought. Yeah, I was (and still am) way too broke to be able to afford anything being sold in that house! LOL That was fine art being sold there, I  don’t have any damn fine art money!  I have fake-replicas-from-hustlers-in-Otavalo-money, that’s what I have! I traveled all of that way and left without even 1 thing, after all that crap I talked. The nerve of me! lol Uhhh Still, it was beautiful art to look at, I was highly impressed.

If you are lucky enough to be a guest in her home, you can share a meal or just buy some fine art that she has there. I believe just about everything you see is for sale. I don’t know if many know about this place, but this is definitely an Easter egg to search out if you make it to San Miguel de Salcedo. She should advertise more, on the Internet, to move more of her work, because the world needs to see it!

Oh and that lady friend, I got her some things from the Ecuadorian airport store but lied and told her I did Indiana Jones-style hunting for her gifts, all throughout Ecuador’s highlands. Let’s keep that a secret! 🙂