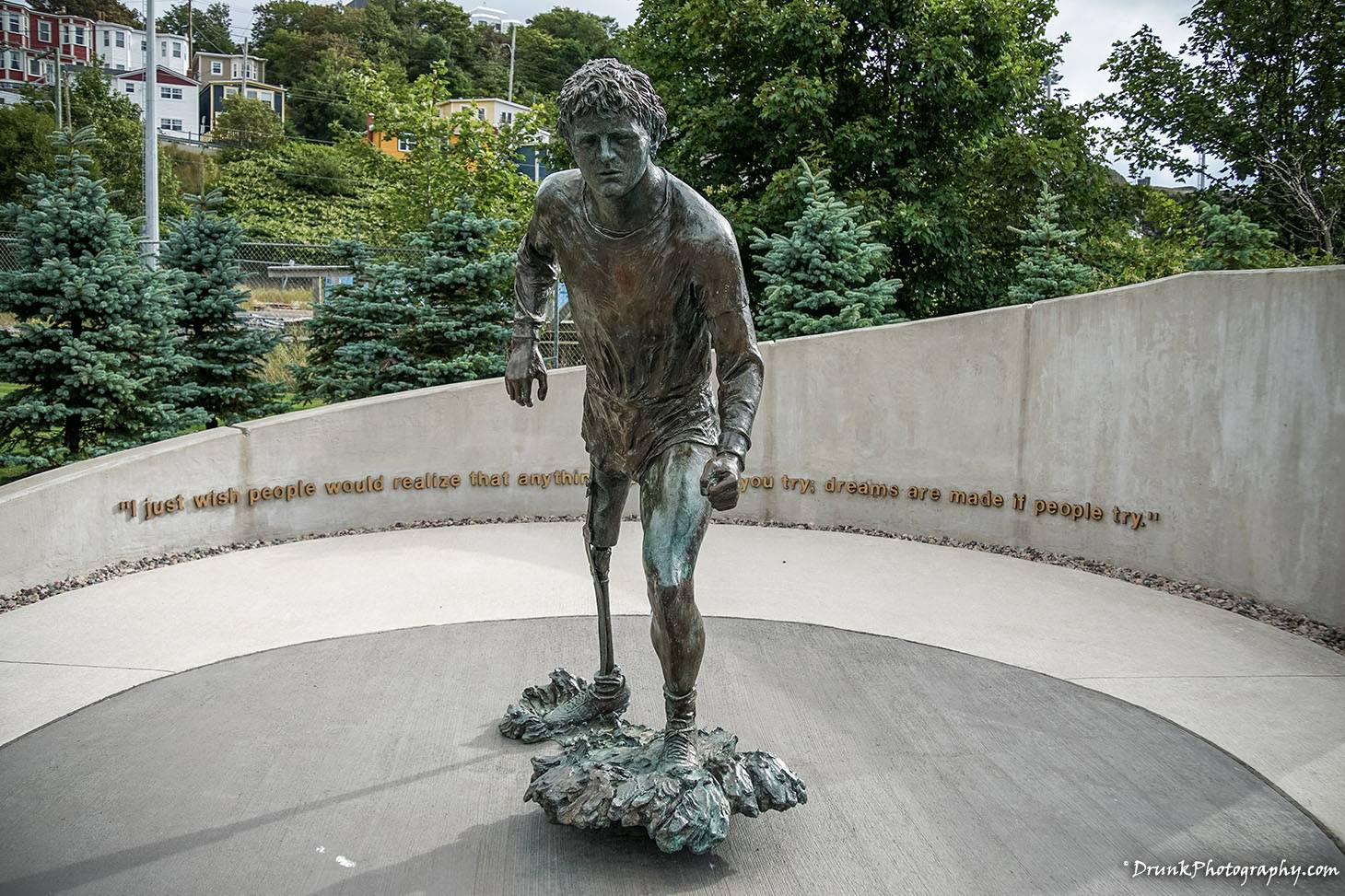 Before the Corona virus lockdown, I was on a roll to complete the quest to see all of the statues in dedication to Terry Fox. “Who is Terry Fox”, you ask? Well I didn’t know either, initially, until I was on a trip to Victoria, British Colombia, Canada and went out to do a walking loop, to see the beautiful scenery along the waterfront, by using the main Douglas Road, and staying with the roads that line the coast, and end up back Oak bay road, heading back to town. I came upon a sign that read “Mile 0 monument”, while on that walk, and was really curious to see what it was in dedication of. I saw there were people somewhat misty-eyed while reading the information at the location, so I wait for them to finish up so I could see what the commotion was about. I learned about someone named “Stephen Fonyo”, a runner and Canadian who ran over 8,000 kilometers, from St. Johns, Newfoundland to this point in Victoria, Canada.

First, Newfoundland is an island, so I knew that wasn’t exactly precise, but I get what they meant, minus the water, he ran from the eastern point of Newfoundland, Canada, and after reaching land again in Canada, ran all the way to Mile 0. He did this in 1984 and completed it 425 days later in 1985.  The other wild piece of information here was that he did it with an artificial leg! Yes, Stephen lost his leg at 12 years of age, due to his battle with Cancer, but never gave up in life. He did this run that was called “Journey for Lives”. I Googled him to see a little more on him, and was like WTF, why did they make that statue back there? The Stephen lost his LEFT leg, and therefore the artificial leg was his left leg. This statue (behind) had a person who has an artificial leg that was the RIGHT LEG. I was like “what a huge oversight, how could they do that? That’s foul!”

I walk back to inspect the statue (behind) and I saw that there was a completely different name on the Statue, with a completely different face, with a life time date that ended before the legendary “Journey for Lives”. This statue had the name “Terry Fox”, “1958 – 1981” . So, I had to quickly get on Google to figure out this mystery. What I found was that Terry Fox was the original runner who planned to run from St. John, Newfoundland all the way to Victoria, Canada. Terry Fox was a huge athlete, fundraiser for cancer and humanitarian who came down with cancer, when he was 19 years old, and in 1980, had to have his leg amputated due to the disease. Determined to not let cancer control his life. Sure, the leg was amputated, but he continued to run, and also, he a good basketball player, so he continued to play wheelchair basketball. He came up with the idea of “the Marathon of Hope”, his quest to the run from the east of Canada to the west. He had many people looking at him like “how would that be possible?”, but he didn’t let that stop him, he began the quested to run, starting in St. Johns, Newfoundland, Canada, which was on the complete opposite side of Canada, from the place I was currently at, “Mile 0”. If dawned on me that I was actually standing at the LAST point of the planned run, in the western-most point, and that Mile 0 did not mean that START of the run. Awwwww

Unfortunately, on day 143, kilometer 5,373 (3,339 miles) of the course to the west, his cancer came back worse than ever, and had to be treated multiple times. Cancer struct really terribly and took over his whole body at that point. Even Pope John Paul II and celebrities were aware and sent concern and praise for Fox, it was a big deal in ‘81. Terry Fox died just shy of his 23rd birthday. The news shocked the world over, and to this day, many runners, from all over the world, participate in runs to honor his legend. One of the most notable to be inspired by Terry Fox was Stephen Foyo. Stephen wanted to take the goal of Terry Fox and complete it, but rather than pick up where Terry Fox left off, Stephen Fonyo did the FULL COURSE, at 18 years of old, starting at St. John, Newfoundland, Canada. Out of respect for Fox, who didn’t want anyone’s help in completing the course, he wanted to do it alone, so others didn’t want to step on his progress while alive. The other possible athletes did honor the request, so as to not disrespect the efforts, but no one knew that cancer was coming back fierce, until he was pulled from the quest, to be treated, figuring that he would just get looked at and then resume shortly after getting checked. Unfortunately, this time, pneumonia struck, and that affects the lungs, which meant that goal was certainly over for Terry fox. It’s a truly heartbreaking story, which is why it’s cemented in history.

The two Canadian amputees are honored throughout Canada, but you’re more likely to have people who know of Terry Fox’s name, then Stephen Fonyo, due to the global impact of Fox when he was alive, and how he lost his life. When I was in Newfoundland, I was just walking the water, and way in a corner, tucked away where there was absolutely no traffic what so ever, I spotted a statue, of someone who was a runner, old school booty shorts that every had on back then, and an ARTIFICIAL RIGHT LEG! I dash over to this thing and BAM- it’s Terry Fox! What I bumped into was the first statue to commemorate the start of the “March of Hope”. Terry Fox is considered one of Canada’s greatest humans ever, for his effort. Seriously, he was a big deal. HBO even made a movie about him called “The Terry Fox Story” with Eric Fryer and Robert Duvall.  There was also the ESPN 30 for 30 special on his called “Into the Wind”. You may not have heard of him, but now you know, so go check those pieces of work out! Unbelievable how  I had accidently bumped into two pieces of history. That means there are 2 other statues of Terry Fox that I need to get to, at some point in my life, so I’m adding them to the bucket list!