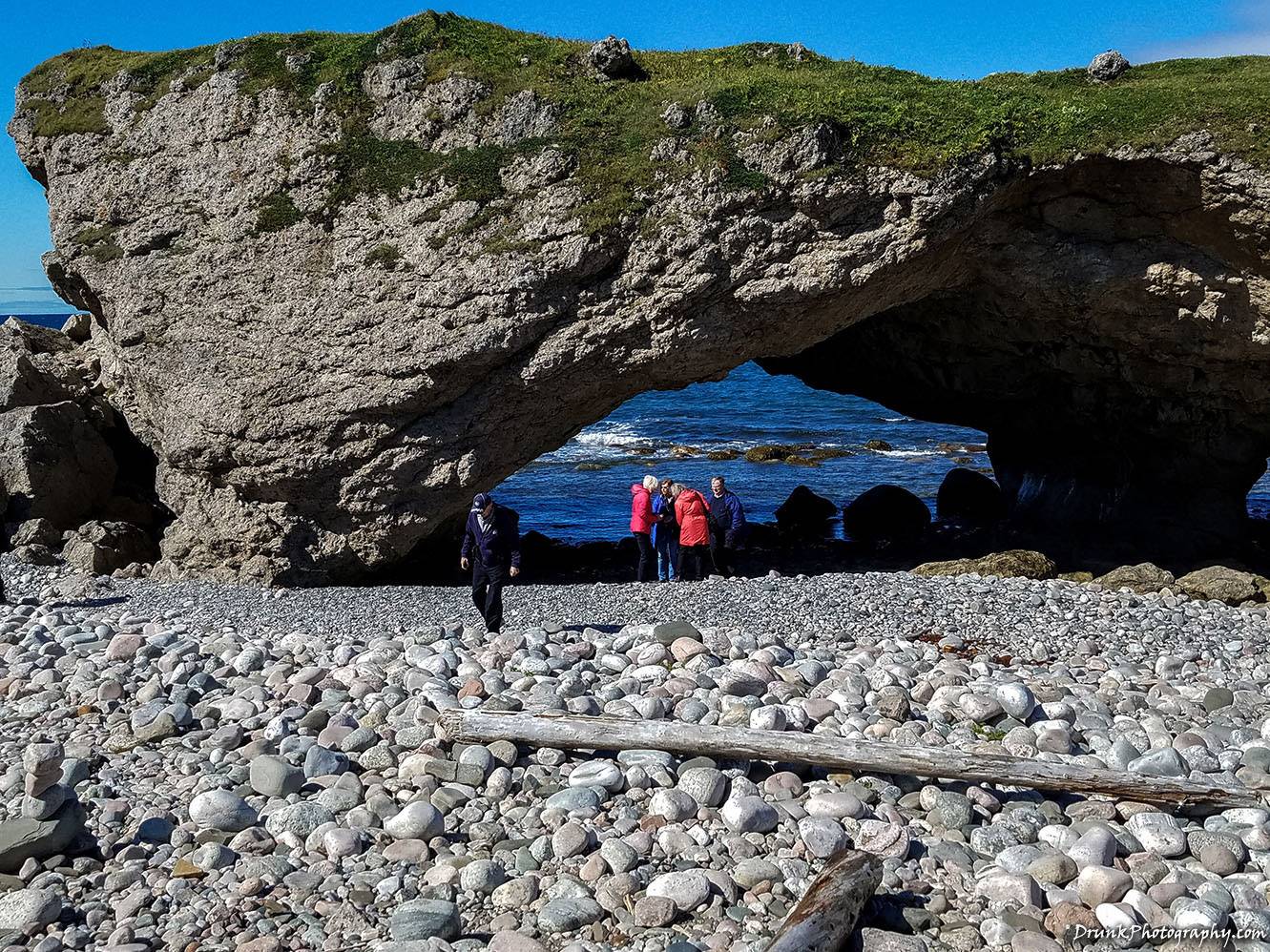 Located in Portland Creek area, the North West side of Newfoundland and Labrador (just north of Gros Morne National Park), there exists a unique rock formation that protrudes from the coastline, where it meets the ocean via the Gulf of St. Lawrence. It’s named The Arches Provincial Park (aka The Arches), which describes the shapes created in the rock formation. The shapes are these archways that give a beautiful view out to the ocean, which has been cut out of the rocks by millions of years of tidal waves crashing into the rocky coast. There are 3 archways available to walk through, but there apparently used to be 4 of them, until the one furthest left collapsed, as over time, all of them will do. You can also climb on top of the arches, and walk on top of them. If you’re thinking about doing that, you should really consult your primary health care professional first, because if you fall, you’re definitely plunging to your death, or you’ll be horribly disfigured for the rest of your life, and won’t even know if your medical card will work in Newfoundland and Labrador, to receive help. How ’bout you leave the Daredevil act to Netflix, Champ.

The millions of rocks that make up the bed of the coast, the solitary boulders, and the mountainous rocks which make up the arches, are the only remaining rock evidence of what used to be in this area. The solitary boulders are actually part of what used to be a connection to the remaining structure of the current Arches and have broken off into piles of rocks, dispersed by the tides. That makes this coast a little tricky to navigates because it’s a beach-bed which is completely filled with head and fist-sized rocks in all directions, some of them can be a little slippery. It’s pretty difficult to quickly navigate because if you move the wrong way, you’re going to sprain your ankle or something. These rocks are mostly dolomite and limestone, theorized to have come from the Ordovician period (a period mostly described as a time when seas were filled with lots of species, plants began to form on land, and Arthropods came on land). It was a part of what is known as the Cows Head Group, and has broken off and completely eroded into what is now seen standing on the coast.

It might seem silly to stare at “rocks” but you really have to get out to a place like this, see it, and experience how beautiful it is to be in a place like this. There is a picnic table there and it’s a great spot to just chill-ax and let that hate all go. It gives you a sense that there is something greater than you out there when you’re under those arches and looking out on the sea. The Arches are millions of years of collections of beautiful, natural, chaotic events, culminating in a form of beautiful ruins, which are marveled the world over. In the grand scheme of the existence, you’re just a minuscule collection of randomized bacteria contained in elastic skin wrap, created out of  less than a few decades of chaotic events that you brought on yourself, resulting in the trash selfies of your made-up face on your social media page, on display for the world, as you pray that they interpret you as beauty. You pale in comparison. It’s also considered a romantic spot, so if you bring the lady, you’re definitely getting point for pictures you take at this spot, trust me. I also ended up taking lots of pictures, for couples, when they discovered what I was up to, down there, under the Arches. I was Cupido for a day. Unfortunately, I wasn’t in this area for long, it’s a good stoppage point for going to Gros Morne National Park, or where I was headed, Labrador via ferry. When I return, this is a great place to do sunset photos, so I’ve put a pin in this one, on my map, as you should do too.