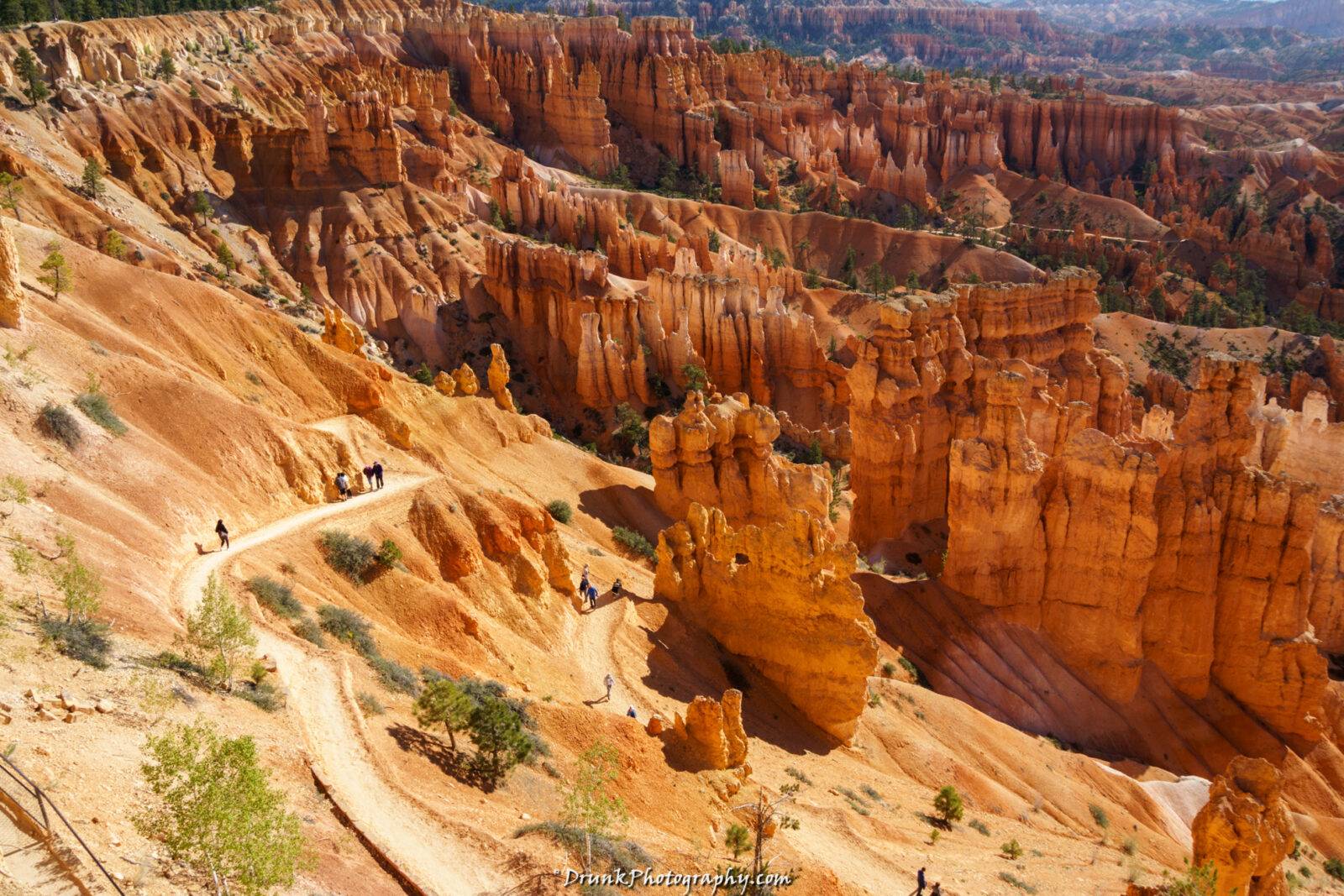 Bryce Canyon is hands down one the most beautiful places to gaze out over the land at. It is equally puzzling as it is beautiful, and you probably would need to bring a little map if you intend on actually going down into the canyon itself, and can’t do that without a guide. It is a great place to get a very good workout at, while enjoying the beautiful scenery, and I did just that, while I had a very nice, clear blue day ahead, in Utah, USA.

I had never seen anything like this. Sure, I went to the Grand Canyon, but that doesn’t look anything even remotely similar to Bryce Canyon. The Grand Canyon looks dead! Bryce Canyon looks extremely vibrant and has a lot of greenery lined up between all of the rock formation, which accent the canyon beautifully. So when go to the top of the viewing area, you look out and are amazed at what you are looking at, but you are even more puzzled as to what in the world you are looking at. I heard quite fa few people express how confused they were about what exactly they were looking at there, but how pretty it looked.

I was pretty confused too, good thing I had a little bit of knowledge going in, because I would have missed a lot of detail. Photographers LOVE this location because you can get some really cool gradients with all of the elements in the shots, from the backdrops of the mountains, to the lower valleys in the far-reaching areas to gradients in rock, tree and grass. People spend HOURS on computer programs trying to falsely create these effects, as well as DOF falsifying techniques, but really, any old shot will convey the magic in this place, even my worst shot (insert tree in front). If you’re trying to practice photography, I can highly recommend going to this place because the day you pick, the time you pick, the season you pick, can make you end up with completely different pictures even from the same spot! So that leaves you wonder why this place is such a good find. Sunrise point is a great viewpoint.

Is Bryce Canyon really a Canyon?

Ok, first, Bryce Canyon is clearly not a canyon so the name is not right, to begin with. Bryce Canyon is what is known, in the geology field, as a “natural amphitheater,” meaning it is rock formations that create and amplify sound with echoes that carry far across the formation. So that’s the first thing to clear up because to be considered a canyon, it had to be formed by erosion caused by a massive body of water streaming through, which never happened. The second is what in the hell are those spikes that are peaking, all over the place. Those are called “hoodoos”, which are mostly volcanic rock mixed with a combination of minerals/rocks/nature sediment that piled up through the years and protruded to make them and they are shaped by however the soft vs hard rock gathered where it did and natural erosion.

Due to the randomness of how the hoodoos are formed, you will discover that some of them are 18 meters (6 feet) while others are as tall as an office building in a city. This randomness of its rock formation also contributes to the variation in colors that you find them in, even in Bryce Canyon, the gradient colors are natural occurring, which I thought people were doing in photoshop, when I first saw this location in pictures. It blew my mind to see that this was actually a natural occurrence. Bryce Canyon was once under a large body of water, a lake and throughout the years deposits of sediment ended up floating and combining to make those hoodoos. Then subduction is made by Earth’s plates lifting another plate up, causing plane elevation. Then, to top off the magic, Bryce Canyon received a lot of snow and rain, which meant weather played a huge part in the erosion, which chipped away at the rocks to create the hoodoos, which was the evidence for why Bryce Canyon was not created by a massive body of water-stream and therefore can’t be called a canyon.

End of the road for Bryce Canyon?

No two look the same and you will mostly find them in desert-like areas that are dry and hot, which contribute to the formation being soft rock piled on top of hard rock combined and solidifying over time. Bryce Canyon is located on the eastern side of the Paunsaugunt Plateau  which was created 10 to 20 million years ago and is an offshoot of the Colorado Plateau which binds four US States: Utah, Colorado, Arizona and New Mexico! It’s massive. All of the sediment tends to contain Calcium Carbonate ( CaCO3) which is known to break down if in contact with acid. You can actually eat Calcium Carbonate, and many do as a dietary supplement and your stomach acid breaks it down. Hmmm “why would this area suddenly be subjected to acid?” you may ask.

The answer, MOSTLY DUE TO HUMAN NEGLECT OF THE PLANET! Fossil fuel emissions go into the air as Nitrigen Oxide+Sulfur Dioxide (NOX+SO2) and they can span the entire length of the country with a good storm that carries the wind far. Those are the chemical that form ACID RAIN! All of the power plants and exhaust from vehicles kills off the hoodoos, in addition to what you already knew it killed, wildlife! How crazy is that? Acid also contributes to the structure of the hoodoos changing so much, which is why it goes concave vs convex so much and isn’t uniform due to rain/wind patterns. Actually, the pathways to walk were created specifically so that tourism didn’t help destroy the hoodoos because the rocks are altered even by people interacting with them, that are that susceptible to manipulation at the base when you step up to them!  This means that hoodoos will not be here forever, mostly due to human mess! These hoodoos erode 4 feet every 100 years, so catch this beauty while you can!