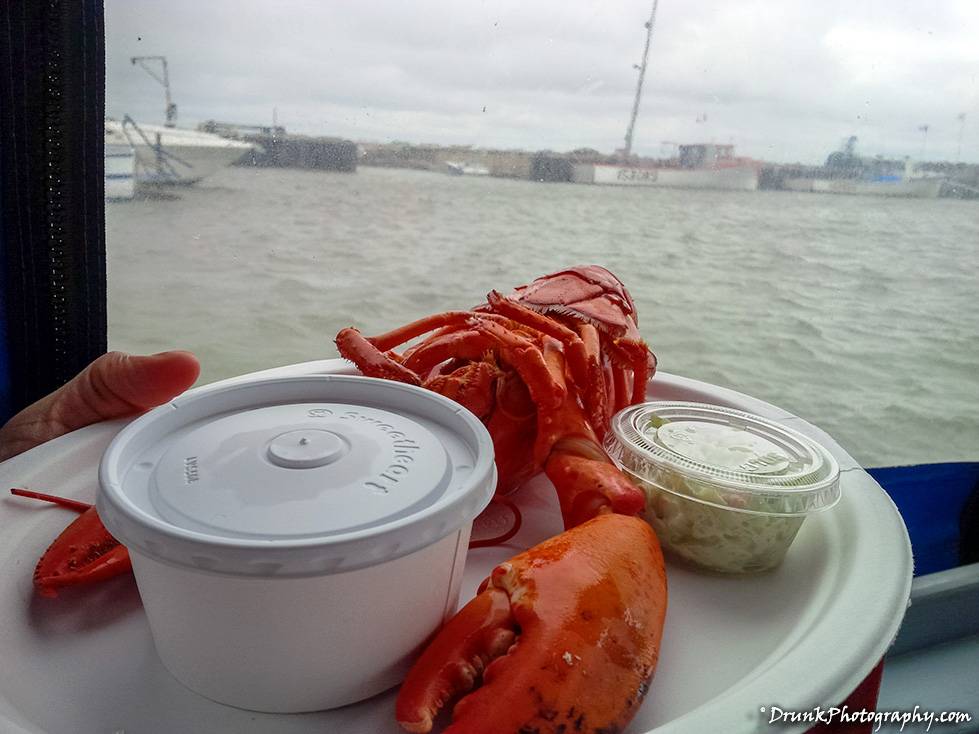 KNOWING A GOOD CATCH WHEN I SEE ONE

Just when you think you’ve learned all that you could possibly learn, there is always more that you can digest mentally, if possible. For the price of 1 dirty, cheap lobster in NYC, I was able to do a private group tour on a lobster-boat avec Croisière de la Baie de Shediac (Shediac Bay Cruise) and eat a clean Lobster, in Shediac Bay, New Brunswick, Canada.

Hanging out with the ever-entertaining Ron Cormier, and his wife Denise, they take you out into Croisière de la Baie de Shediac in their custom-made 53-foot lobster boat, which can sit about 65 people at a time, and has full heating inside, their gem the Ambassador. Ron is a retired fisherman of the area, and this was the perfect opportunity to pick his brain for information I was begging to find out.

I wanted to know how in the world the fishermen, like himself, are able to still fish and make money, given that there is too much commercialization by major corporations, with huge boats and nets, whom occupy most of the ocean nowadays, taking up all of the sea life their nets can grab. Croisière de la Baie de Shediac is overcrowded for sure. Ron let me know that the Canadian government (in particular the The Department of Fisheries and Oceans) made it so you can’t fish Croisière de la Baie de Shediac all year around, one must be licensed (about 10,000 in north east Canada), have a limited amount of lobster cages (less than 250), and if what your catch in Croisière de la Baie de Shediac is too small (each area has its own measurement but they measure the lobster carapace size) the fisherman MUST throw it back! That’s the way Canada has tried to assure their local fishermen their fair catch for the year, and assure that their waters are not over-fished. Fishing represents a HUGE part of the GDP for Canada, so it’s important to not let the waters get completely saturated with fishing boats, and to preserve the sea life. Croisière de la Baie de Shediac is in Fishing District 23, so lobster fishing is allowed second week of May to second week of July.

If the lobster is a berried female (bearing eggs), then she MUST be set back in the water, it’s the law! Sometimes, a fisherman will notch a V in the tail so that others catching the female will immediately know to let her go too. But what if the mother lobster and baby are stuck in the lobster traps and can’t get out? The fishing industry has tried to do its part as well, despite the supply and demand disaster over-fishing has caused. One of those steps is in how fishermen are allowed to catch these lobsters in the traps they use. You might be familiar with some of the old-school wooden traps, which are still very much in use. They have tiny holes for lobsters to crawl into, and are not designed for lobsters to crawl out of. I’ve seen various forms of lobster catches but these were some different looking lobster cages. I had never seen these types. Having a look at the traps, the traps are made with good sized loops so that undersized lobsters can get out. That’s an excellent design to help limit the in-take of lobsters that fishermen should not keep. If a lobster trap happens to become lost underwater, there is environment design built into it. What also makes these interesting traps is that they are made from biodegradable material, so the bigger lobsters can eventually escape and don’t have to die in these cages, as well. It looks like it’s pure steel, it’s not. Prey for the lobster is also allowed to crawl in but the traps keep predators of the lobster out. So if a lobster is trapped, it has food and protection until the cage is retrieved.

I told Ron how expensive lobsters were, in New York, and he told me a funny story. Lobsters now are seen as a sign of wealth of the people who eat it, a real delicacy. Rich people love Lobsters today. Not that long ago though, rich people would not even touch a lobster if their lives depended on it. Between the 17th and 18th centuries, because there was a never-ending supply of lobster, and too many of them since the waters were not over-fished then, they were not seen as special to North Americans. People tired of seeing and eating them, they’d be piled up on the beaches and their shells, so they gave them to their livestock, fed them to prisoners, and even gave them to their slaves. The prisoners and slaves even got tired of the lobsters every single day of their lives, and sued the masters in court, which forced masters to feed them only 3 times a week. Crazy! Native Americans used them for fertilizer or as bait to catch fish. That’s funny considering how people are going nuts for them today. In the early 1900s, lobsters got a major PR campaign aimed at people whom didn’t know about the negative slant, called it a delicacy, and has reversed the lobster’s fortune.

YOU’VE BEEN DOING IT ALL WRONG

Another major thing that Ron pointed out was, something which completely makes sense, but I have NEVER seen it done this way: LOBSTERS ARE SUPPOSED TO BE SERVED FACE UP, SHELL DOWN! You go to red lobster or your favorite lobster place, and you see the lobster served with the back of the shell facing up on the plate, mostly for cosmetic reasons. That is NOT the way it should be done. When you’re making a lobster, you’re trying to get the meat, but also suck out the juices of the lobster, right? So when you put the lobster with its belly down, you don’t give the JUICES that have collected to stay in the shell and the meat. When you put it shell down, you trap the juices in a cup-like action, allowing you more juice to go with the meat! All the butter and salt remains this way. Now when I see this done incorrectly, I complain to chefs that they need to go back to cooking school.  I learned a LOT on this tour, which I can always appreciate.